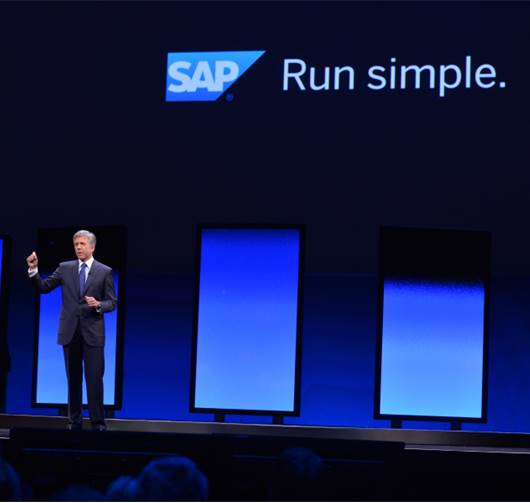 When it comes to enterprise software vendors, SAP wants to be not just the largest but also the most simple. That’s the message behind SAP’s new theme, “Run Simple,” rolled out at its annual SapphireNow user conference in Orlando in June 2014.

At first glance, the theme of simplicity is an odd one. For over 20 years, SAP has been widely regarded as having software that is functionally rich but enormously complex. Its name has become synonymous with implementation projects that run into the tens, even hundreds, of millions of dollars, sometimes ending in failure or at least in organizational exhaustion. SAP is easy to stereotype.

Newly appointed to the sole CEO role, Bill McDermott set the tone in his kick-off keynote: SAP customers need to “fight complexity,” to simplify how they interact with their customers, starting with how they deal with their own workforce. At the same time, McDermott acknowledged that SAP itself has been part of its customers’ complexity.

McDermott is an inspiring and disciplined speaker. But fulfilling this vision will take more than an inspiring keynote. If SAP really wants to beat complexity, it will need to run simple in three ways: in its products, in its ongoing support, and in how it deals with its customers.

Simple Finance the First Step toward a Simplified Business Suite
On the first day of the conference, SAP announced the future delivery of Simple Finance. In a nutshell, Simple Finance will be a major new release of SAP financial applications (starting with SAP’s FI and CO modules) as the first SAP Business Suite products to undergo radical code optimization to take advantage of HANA, SAP’s in-memory database technology.

Based on interviews and a demonstration on the show floor, there are at least three ways that Simple Finance is more simple than previous versions of SAP’s financial management products.

A date for general availability of Simple Finance has not been announced, only that early ramp-up customers are about to start implementation. Following Simple Finance, other parts of the Business Suite will also be “Simplified” until the entire product becomes a “Simple Suite.”

SAP personnel demonstrating Simple Finance appeared genuinely excited about the product. One indicated she was slated to work on implementations with early adopters. She said that she had even signed up some ramp-up customers earlier that day on the show floor, indicating a high level of interest.

New prospects should find Simple Finance much more attractive than older versions of SAP financial systems. Simple Finance will be better received by midsize organizations that might have been otherwise scared off by the size, scale, and perceived complexity of SAP Business Suite.

Product simplification is the most straightforward mandate facing SAP. For the most part, it is only a technical challenge. SAP has many capable software engineers, and HANA does represent a new paradigm for how business systems are architected. This is not to say there will not be bumps along the road, but SAP hopefully will achieve its goal.

Cloud Deployment Simplifying Ongoing Support
SAP also wants run simple in how customers keep their applications up-to-date. Like most traditional on-premises vendors, the majority of SAP customers are not on the latest releases of its products. The reason is that applying new versions (in SAP lingo, “enhancement packs”) is often a labor-intensive activity—testing the new code, retrofitting any customizations, regression testing to be sure nothing gets broken, and migrating data.

SAP’s solution is to take over these responsibilities by hosting customers’ systems in SAP’s HANA Enterprise Cloud (HEC). This program, already rolled out to some early SAP customers, is essentially a managed services offering in which SAP takes all responsibility for day to day operation of the system in SAP’s own data centers. Notably, SAP also takes responsibility for keeping the customer’s system up to date with the latest enhancement packs and bug fixes. It even supports systems with custom modifications.

The managed services offering should allow the customer’s IT personnel to focus less on technical aspects and more on business process design and effective use of the system.

Simplifying SAP’s ongoing support experience in this way will be more of a challenge. Only a tiny fraction of SAP’s customers are committed to this offering today. There is likely to be much inertia in SAP’s installed base about having SAP host their systems. Even though customers may be experiencing pain, many will view migration as short- term cost and effort for long-term benefit. It may all come down to how SAP prices its managed-service offering. If existing customers do not take up SAP on the offer, they will not experience much simplification in their SAP support experience, and SAP will retain its reputation for complexity.

Many other vendors have tried this approach—in particular, Oracle. Although most customers of Oracle Fusion Applications (Oracle’s next generation apps) are reportedly choosing the hosted deployment offering, Oracle is not seeing a mass migration of its preexisting applications, such as E-Business Suite, Siebel, JDE, or PeopleSoft, to its hosted delivery model. It is doubtful that SAP’s experience be any different.

Making SAP Simple to Deal With
The third way in which SAP must run simple is in its customer-facing processes. How easy is it for customers to deal with SAP? McDermott did not spend as much time in his keynote on this point, but he did emphasize it toward the end.

“Run Simple is more than a slogan for SAP—it is an organizing principle for our company,” he said. “We’ll ask the tough questions: Do our products and technologies run simple? Does our customer experience run simple? Are we empowering our employees to run simple? And are we enabling our customers and our partners to run simple? If not, hold us accountable.”

“For customers, we’re committed to a beautiful user experience,” he said. “We will make it simple to do business with SAP: simple pricing, pay-as-you-go in the cloud, simple web experience.”

Those are big promises. Anyone who has negotiated an acquisition of SAP software knows that SAP contracts are incredibly complex. Pricing is opaque, with many various types of named users defined for each product. SAP’s terms and conditions around indirect access (when other systems access information from an SAP system) are onerous.

The result is that it is nearly impossible for an SAP customer to be fully compliant. When SAP does an audit of a customer’s use of SAP products—which it has the right to do—it will find a problem if it looks hard enough.

Even finding the right person in SAP’s organization to deal with is not a simple matter. Whether it is the result of having a worldwide organization or peculiarities of German corporate governance, it is difficult to understand who reports to whom or who is responsible for what.

Lars Dalgaard, founder of Successfactors, recently commented about SAP’s organizational problems. “[SAP has] this messed up reporting structure where nobody reports to anybody,” Dalgaard said. “It’s this German thing where I didn’t even report up to Bill [McDermott] myself, I was reporting to the Supervisory Board. That doesn’t work. It just doesn’t. I mean, the COO doesn’t report up to the CEO?”

Dalgaard was positive about McDermott’s new role, however. “Someone has to be the decider, and with Bill, now they’ve got a decider on the job, I can tell you that,” he said.

The complexity of SAP’s organization not only affects customers; it affects anyone who has to deal with SAP. Talk to SAP partners, third-party developers, SAP suppliers, and industry analysts—nearly all of them say the same thing. SAP’s organization and decision-making processes are extremely difficult to navigate.

Following McDermott’s recent appointment to the role of sole CEO, SAP underwent a major reorganization, laying off an undisclosed but apparently significant number of employees. SAP claims this was not to cut costs but to better align the organization with SAP’s strategy. If so, the reorganization could be consistent with an attempt at simplification.

Can SAP Change Its Culture?
SAP’s organization and customer-facing processes will be the most difficult to simplify. Technical simplification is an engineering problem. Support simplification can be solved if SAP can motivate customers to take up its managed services. But making SAP simple to deal with requires cultural change.

SAP’s culture manifests itself in how people are measured. One example: why did it take an outpouring of customer wrath for SAP to release Fiori at no charge? One source close to SAP indicated that SAP product groups are measured internally by their impact on revenue. If there is no revenue from Fiori, there is little recognition for Fiori developers. It is likely that SAP executives understood from the beginning the opportunity in delivering Fiori at no charge. In a previous Research Byte, we argued that SAP stands to make more money by delivering Fiori at no charge (because it pulls through greater revenue opportunities with HANA and additional user seats). So why would SAP not make this move sooner? If our source is correct, it is because that general lift in revenue would not be attributable to Fiori.

What Does “Run Simple” Mean for Enterprise Tech Buyers
Large tech vendors change their marketing messages periodically, with no change to their core strategy, values, or culture. Is “Run Simple” merely a branding exercise or will it be a reality in how customers experience SAP? Time will tell.

In the short term, Simple Finance deserves consideration. In looking for new financial systems, business leaders who might have otherwise dismissed SAP as too complex should take a look at Simple Finance. New and existing customers should also investigate SAP’s managed-service offering. But be prepared for continued complexity in dealing with SAP.

SAP did not become a complex organization overnight and it certainly won’t be easy to simplify. McDermott specifically told customers in his keynote to hold SAP accountable. To encourage such accountability, McDermott should follow up in next year’s user conference with a progress report.

This  Research Byte was authored by Computer Economics President Frank Scavo, who also heads up our sister management and IT consulting firm, Strativa. For assistance in formulating an IT strategy or evaluating enterprise system vendors, please contact us.