Change is a way of life in IT organizations. New technology adoption, automation, regulatory compliance, and outsourcing initiatives can only be accomplished through projects, which need to be properly planned and controlled.

It is no surprise, then, that after two years of decline, the number of project managers as a percentage of the total IT staff increased in 2018 and 2019. As shown in Figure 1 from our full report, IT Project Management Staffing Ratios, project managers in 2019 made up 5.4% of the IT staff at the median, the highest percentage in five years. 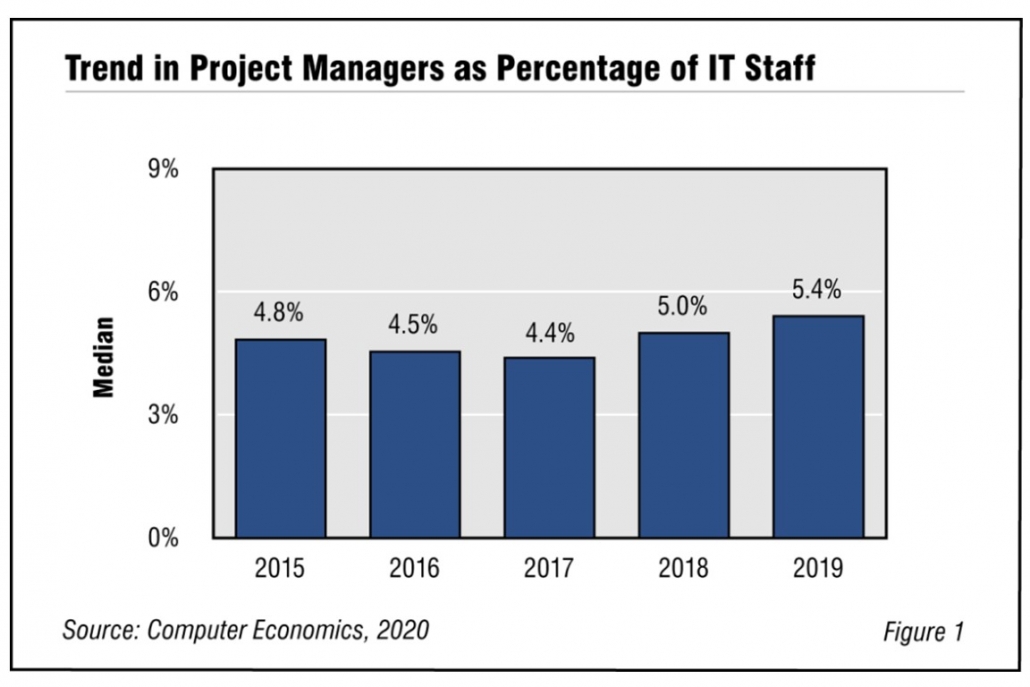 Although the project manager is not responsible for the direct creation of project deliverables such as systems design, program code, or documentation, he or she is responsible for ensuring that these deliverables are completed according to plan. IT projects are known for costly overruns, if not outright failure. Good project management can mitigate such risks. As such, project management staffing will always be volatile as companies react to project successes and failures. But for the most part, we expect growth in this role.

“Another factor in project manager staffing is the expansion of outsourcing application development work,” said Tom Dunlap, research director for Computer Economics, an Avasant company, based in El Segundo, Calif. “As difficult as it is to successfully implement new systems, the difficulty is compounded when service providers are brought into the mix.”

The increase in project manager staffing is consistent with the changing nature of IT work. As we see in our other IT staffing reports, the percentage of personnel in so-called soft skills roles is increasing while many support staff roles are declining. IT managers, IT finance, and business intelligence specialists, as well as project managers, are increasingly in demand, as IT is reducing its infrastructure burden. Support roles (with the exception of network support) are declining with the use of software as a service (SaaS), public cloud, automation, and other tools that reduce the data center footprint. This trend is far from over, as most businesses are not far along in their cloud transition.

This Research Byte is a brief overview of our report on this subject, IT Project Management Staffing Ratios. The full report is available at no charge for Avasant Research subscribers, or it may be purchased by non-subscribers directly from our website (click for pricing).