IT Salaries Rising Despite Economic Slowdown

After several years of growing investment in technology, IT managers are now coming under pressure to restrain headcount, reduce costs, and improve the efficiency of their IT operations due to the slowing economy. At the same time, there is ample evidence that investments in Web-based initiatives, database-centric business applications development, and converged voice/data networks will continue to place upward pressure on salaries for certain job functions where skills are in tight supply. This two-sided squeeze will make 2008 a challenging period for IT executives.

Our 2008 IT Salary Report projects that U.S. IT workers as whole will receive a median pay raise of about 3.7%. This is an aggressive number, but in line with recent trends. The upward pressure on IT salaries has been steady since bottoming out during the “tech recession” in the early part of the decade, as shown in Figure 1. 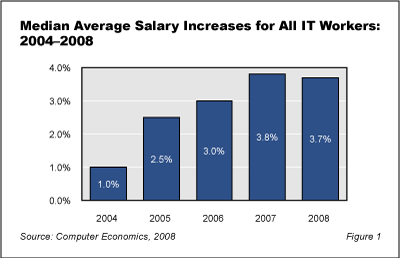 In comparison, according the U.S. Department of Labor’s Bureau of Labor Statistics, U.S. salaries in general rose 3.3% year-over-year in third quarter of 2007. In other words, while companies are likely to restrain hiring, we project that IT salaries will continue to rise at a slightly faster rate than the national average, but that the rate will level out this year. Our data further suggests that median pay raises at midsize companies will be in area of 4%, while large and small companies will show greater restraint with median raises closer to 3.5%. 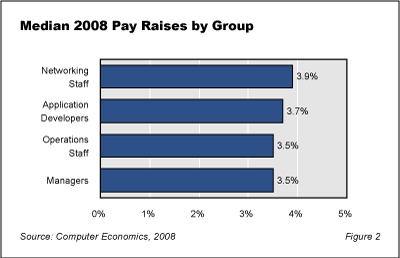 We project that networking personnel will receive a median 3.9% increase in 2008. The networking group includes security analysts, network administrators, systems administrators and programmers, webmasters and web designers, telecom analysts, and test engineers, among other functions. One factor driving this group’s salaries upward is the expansion of network management staff’s responsibilities to include security, compliance, and telecommunications. “It’s added complexity; it’s added staff; it’s a perfect storm,” says John Estes, vice president of Robert Half Technology, an IT recruitment firm.

The management group includes vice presidents, directors, and managers, as well as support staff, including senior auditors, project managers, and trainers. As a group, they can expect raises slightly below the overall national median at 3.5%, although we anticipate that management skills will remain highly valued and even increase in value over time. 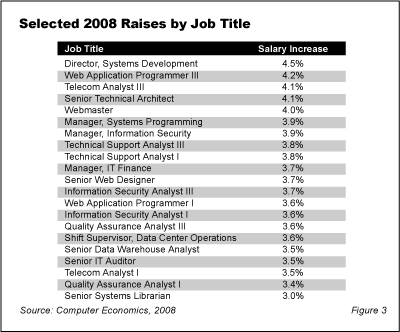 Regional Variations
The rate of salary increases changes significantly from region to region due to variations in cost of living, economic growth, and labor supply. According to our projections, salaries are likely to increase more in the Pacific and South Atlantic regions than elsewhere. Wages in the Pacific states, which include California, are likely to see already-high wages rise another 4.2% on average, while the South Atlantic states, ranging from Delaware to Florida, could see a similar escalation, albeit from a lower base. Organizations in the Mid-Atlantic states, including New York, Pennsylvania, and New Jersey, and eastern North Central states, including Wisconsin, Illinois, Michigan, Ohio, and Indiana, should experience upward pressure on salaries closer to the national median at 3.5%. In the South Central and West South Central states, ranging from Alabama to Texas, raises are likely to lag behind other regions and fall more in the 2-3% range.

Other Staffing Trends
According to our research, companies at the median level increased headcount by 1% between 2006 and 2007 and experienced a 5% turnover rate. In the current climate, we should continue to see restraint in the area of headcount and turnover rates. Longer term, IT managers are preparing for a wave of baby-boomer retirements and worrying about the declining number of college graduates in technology-related fields. Therefore, worker retention, recruitment, and training programs will probably receive added emphasis in 2008 and beyond. As shown in Figure 4, spending on training ranged from $1,000 per IT employee at the 25th percentile to $3,000 at the 75th percentile, with the median for companies of all sizes of $2,000. 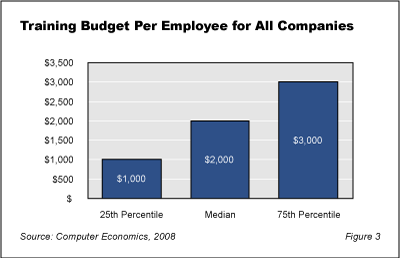 There are also indications that companies are employing more liberal telecommuting policies as a form of non-cash incentives for some workers. In the IT services sector, employers are likely to increase performance-based incentives as part of their overall compensation packages, providing IT professionals another avenue for improving their compensation.

Computer Economics Viewpoint
Personnel costs have been rising as a percentage of most IT budgets, and we expect this trend to continue. The market will continue to place a premium on IT professionals with project management skills, people management skills, and real-world problem-solving skills and experience. On the other hand, hiring restraints will lead to increased use of outsourcing and contract workers. As a result, we find companies placing less and less value on purely technology-related certifications and more value on experience and business acumen. In general, IT workers at the lower end of the skills continuum and those with purely technical skills may see their pay levels reduced as a result of today’s marketplace.

The salary study was undertaken as part of the Computer Economics 2008 IT Salary Report, which provides base salary projections for 78 specific job functions in 78 U.S. metropolitan areas. Salary ranges are reported for small, medium and large companies at the 25th percentile, median, and 75th percentile levels. 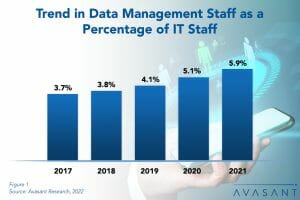 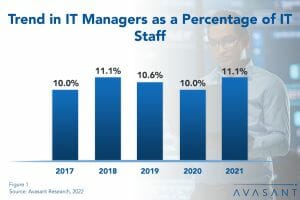 IT Management and Administration Staffing Ratios 2022