IT Salary Growth is Accelerating

In 2007, IT managers will be challenged by a tighter market for skilled IT professionals and IT salary levels that are rising across the board. While the IT job market will not be nearly as frenetic as it was in the late 1990s, we expect it to be more active this year than at any other time this decade. Additionally, while the projected average salary increase in 2007 across all IT positions will reach 3.8% (the highest point since 2001), it will still lag behind the 4.2% average U.S. wage increase for all professions, as reported by the U.S. Bureau of Labor Statistics in 2006.

With a favorable job market, many IT specialists will have increased leverage this year, which will translate into larger compensation packages. This could also result in more individuals changing jobs in 2007 as they look to maximize their earnings. This may be especially true for senior managers and technicians as these groups continue to experience a “thinning in the ranks,” which means that companies will likely pay a premium for the key experience these individuals offer.

This Research Byte is an executive summary of our 2007 IT Salary Report, which provides an analysis of IT staffing and salary trends from 2001 through 2006, including our projections for 2007. It also provides extensive tables of salaries for 81 IT job positions in 70 U.S. metropolitan areas for small, medium, and large organizations at the median, 25th, and 75th percentiles.

IT Salary Trends
As one might expect, IT salary trends have closely mirrored IT staffing trends over the past several years, resulting in some rough times for many IT professionals. From 2002-2004, most organizations were only able to offer minimal wage increases (if any) for most of their IT staff members.

The table below identifies the IT job positions (other than the CIO) that garnered the ten highest average salary increases nationwide in 2007. The positions included in this list are similar to last year’s, although some jobs gained or lost ranking position. System analysts and customer relationship managers dropped out of the top ten this year; taking their place in the 2007 top ten are technical support and telecommunications managers. 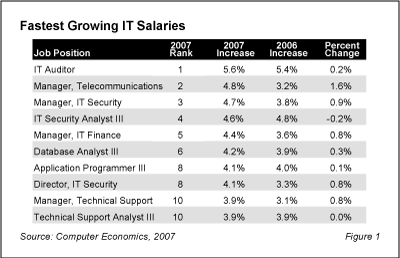 The 2007 IT Salary Report also includes analysis of current IT salary and staffing trends, such as employee turnover rates by organization size and changes in the use of outsourcing by organization size. It also analyzes the factors that affect variation in salaries by job function and geographic region.

This article is extracted from the executive summary of our 2007 IT Salary Report, which provides additional details on IT staffing changes from 2001 through 2006, including our projections for 2007, along with complete salary statistics for 81 job positions in 70 U.S. metropolitan areas. Salaries are shown for small, medium, and large organizations, which are further broken down at the median, 25th, and 75th percentiles.