When it comes to new spending, IT departments have two rather clear priorities—secure their data and continue the transition to the cloud, according to the Computer Economics annual IT Spending and Staffing Benchmarks study for 2017/2018. Given the constant array of new threats facing IT departments every day, it is no surprise that security is a major priority. Malware, ransomware, phishing attacks, and security breaches are a near constant in the press, with the cost of repairing the damage and regaining customer trust also increasing. At the same time, cloud applications and infrastructure not only improved security but also improve budget flexibility, which allows IT departments to more effectively respond to the needs of the business. 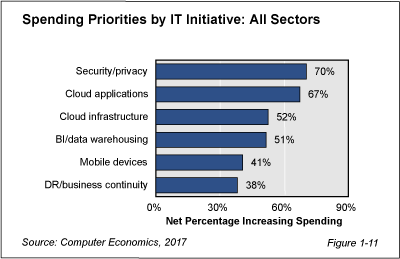 Despite being last on the chart, the study also reports a noticeable uptick in disaster recovery/business continuity spending growth. Only 33% of respondents last year reported increased spending in this area compared to 38% this year. That ties the highest year-over-year increase with cloud applications, which went from 62% to 67%. Disaster recovery and business continuity should be perceived as a complement (if not a direct part) to security as a larger risk management strategy. Many forms of malware, especially ransomware, not only result in loss of data but also disrupt company operations.

The rise of cloud applications has been going on for many years, but it continues to accelerate. Delivering software as a service under a subscription allows organizations to simplify their IT infrastructure and enjoy greater flexibility of cost.

The Computer Economics IT Spending and Staffing Benchmarks 2017/2018 study is based on a detailed survey of more than 200 IT executives in the U.S. and Canada on their IT spending and staffing plans for 2017/2018. It provides IT spending and staffing benchmarks for small, midsize, and large organizations and for 25 sectors and subsectors. A description of the study’s metrics, design, demographics, and methodology can be found in the free executive summary.

This Research Byte is a brief overview of the findings in our report, IT Spending and Staffing Benchmarks 2017/2018. The full 28-chapter report is available at no charge for Computer Economics clients. Individual chapters may be purchased by non-clients directly from our website (click for pricing).