The future of IT is in the cloud. Yet, few organizations can lift and shift their entire IT infrastructure to a single cloud provider. Some systems are best deployed on one cloud, others on another. And  some legacy systems may best be deployed on-premises or on a service provider’s infrastructure. In other words, the future calls for a hybrid cloud foundation.

But if IT leaders are not careful, a hybrid cloud environment can be incredibly complex, with each cloud provider having its own protocols, tools, and standards. This inflates the cost of IT and limits the portability of systems, hindering business agility. A far better approach is to build a hybrid cloud foundation on open technologies, such as containerization, that can be deployed across cloud platforms and managed through a single pane of glass.

This Research Byte highlights just a few of the salient points brought out in the discussion. For a replay of the full digital forum, see the link at the end of this summary.

Many companies today are managing hybrid cloud environments that are extremely complex. Whether it be because they grew through acquisition, whether they lifted and shifted workloads to the cloud without an overall strategy or plan, or whether they let individual project teams make their own platform decisions—the result can be complexity that becomes economically and operationally unattractive.

A solution that HCL uses, according to Piyush Saxena, is to have a standard reference architecture across multiple partners that can be deployed repeatedly across any of its customers.  He said:

I have one interesting example with a large energy utility customer, where the architecture was owned and defined by the customer. We had a combination of multiple partner technology solutions, where it became practically impossible for us to troubleshoot the issue without actually recreating the scenario in our labs. That is when we realized how critical it is to have a standardized validated reference architecture across our partner ecosystems. That is how I define simplicity: a standardized approach towards technology deployment.

Joe Fernandes spoke about failures in lifting and shifting applications to the cloud without an overall plan in advance.

First, we help customers to take an applications inventory and determine what are good candidates to move to a public cloud environment. Then, we help them choose the right cloud, because most customers are not just dealing with a single cloud, plus deployments out at the edge. We help them really think through the characteristics of each workload and match it to the appropriate infrastructure and build it all with automation in mind, to make the management efficient and consistent. 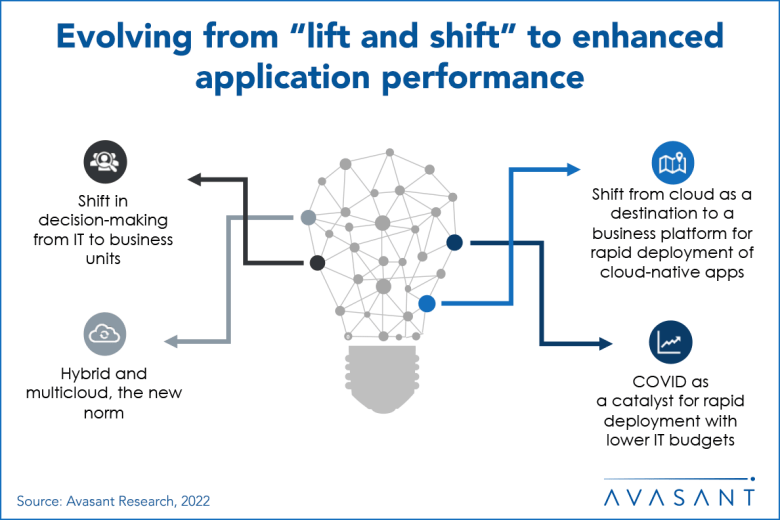 Henry Guapo spoke about how customers get themselves into such complex hybrid cloud environments. Avasant clients, he said, tend to be very large and in many cases 30, 40, or even 100 years old. So naturally, they’re going to be very complicated in how they run. As a result, their hybrid cloud environments today have grown without a plan over the years, with various on-premises systems, SaaS environments, and multiple public clouds. Everything was done on a case-by-case basis, often depending on when hardware needed to be refreshed or to pick low-hanging fruit.

Organizations that that really have simplified their environment understand that hybrid cloud is really a new operating model. And all of the components that help things run well respond well, need to be in place. For example, IT having the right partnerships with the business. And then the old adage people, process, and technology, with the right governance model in place, and the right security platforms. So, simplicity means getting that right, comprehensive, operating model mindset, and not just looking at hybrid cloud as technology. And, very importantly, getting to that right level of automation and standardization. Then IT can really free up time to focus on transformation, while leaving the operational aspects to automation and standards.

The panel spent some time discussing success stories of organizations they have seen in establishing and maintaining hybrid cloud deployments.

Henry Guapo spoke of a very large US-based utility, where he helped them develop a strategy and process for making decisions on the “what” and the “why” for migrating various applications to the cloud.

Piyush Saxena spoke about his work with one large auto manufacturer that was being divested and had to build a complete IT environment from the ground up for the new entity in a very limited timeframe. With the traditional model, such a project would have taken six to nine months. But with the desire for an accelerated timeline, HCL and its partners took the approach of a standardized reference architecture, mapping it to the customer’s requirement, validating specific use cases, and having the partners test in HCL’s staging area. Because this project took place during the pandemic, most of the deployment was done remotely. Critical use cases, such as multi-cloud orchestration, container deployment, infrastructure as code, and full stack observability were made available to this customer within a week of deploying, deploying the infrastructure. The customer was thrilled with the result, Piyush said:

Overall, in contrast with the traditional approach, we were all most able to shave the deployment time by 75%. We cut the cost of build and migration by 50%. And, we gained a lot of efficiencies deliver a faster time to market for this customer.

Joe Fernandes provided a brief case study of the Amadeus Cloud Services, which Red Hat built for Amadeus and its travel industry customers.

The infrastructure varies depending on the customer that Amadeus is serving. Their customers are airline reservation systems, hotel reservation systems, general travel reservation systems, and others. The customer may choose a different deployment infrastructure, whether it’s their private cloud, running on premise on OpenStack, or whether it’s on any of the three major cloud providers. So, the key was driving that automation that ultimately allowed this to become a business decision, not a technology decision. We want to make it the business decision on where the best place is for a specific customer to run versus something that’s, that’s limited by the technology choices they made.

The panel concluded with a discussion on people issues, such as shortage of skills and the tendency of developers wanting to “reinvent the wheel” in building custom platforms, when commercial solutions are a better choice, allowing the organization to invest more in the business.

This Research Byte is a summary of key points made during the digital forum, Winning Perspectives on Building the Optimum Hybrid Cloud Road Map. A replay of the complete digital forum is available at this link.