As IT Budgets Rebound Building an Effective Technology Roadmap Is Imperative

Research for Computer Economics’ comprehensive 2003 Information Systems Spending study showed that over 40% of responding organizations increased their IT budgets for 2003 versus 2002, while over one-half held flat or lowered IT budgets. Figure 1 shows the specific breakdown of results: 44% of the companies had increases in their IS budgets over 2002, while 32% reported decreases, and the remaining 24% of the companies reported their IS budget remained level this year. 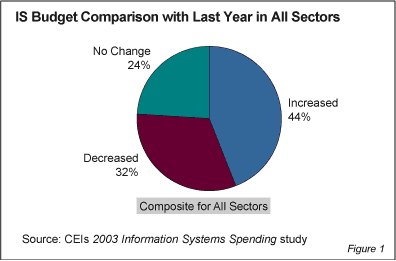 Our preliminary data for 2004 indicates that IT budget increases will be much more positive than they have been over the past two to three year period. Recently, several important economic indicators have helped to reinforce this trend, and many business forecasters have cautiously hinted that 2004 could be a “turn around” year for many corporations across several industry sectors. This is good news for many IT executives, but it also represents a challenge as well.

As the economy picks up, IT organizations will be facing a deluge of new project requests from a customer base that has been forced to hold up key initiatives because of the tight economy. Choosing which projects should receive funding and successfully implementing those projects will likely make or break many CIOs over the next two years.

IT organizations that are minus a solid business plan and a clear set of priorities will be ill prepared to manage the high level of project activity that is coming. Unfortunately, Computer Economics’ research indicates that the majority of IT organizations are lacking the strategic planning required to successfully manage their growing discretionary IT budgets. Building an effective IT strategic plan requires that the IT organization and executive management stop offering lip service to the notion of IT and business alignment and develop a practical and effective strategy to make this happen.

Creating and executing an effective alignment strategy is the key to successfully managing client expectations and ensuring that IT remains a strategic partner of the company. Failing to do so will relegate the CIO to a subordinate position in the executive hierarchy and solidify the notion that IT is a utility function that should be primarily managed from a cost perspective rather than from its ability to provide a strategic advantage in the marketplace.