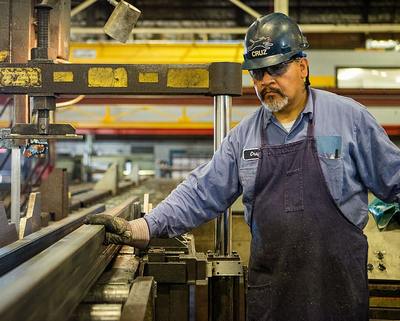 Although ERP has its roots in the manufacturing industry, options for cloud ERP have been more numerous in the services sector. However, this is changing as cloud ERP vendors are increasingly eyeing manufacturers as a market for growth.

The latest vendor to target manufacturing firms is Acumatica. The buzz at its recent user and partner conference in Las Vegas was all about growth. The cloud ERP upstart has hit some noteworthy milestones, most importantly a stable of 6,500 mostly small and midsize customers in 11 years. Plus, the 2,500+ conference attendees dwarfed the crowds Acumatica has seen at its past two user conferences in Houston and Nashville.

Seattle-based Acumatica is known for packaging its products into industry “editions.” Each edition marries Acumatica’s horizontal functionality (primarily financials, distribution, and customer management) with industry-specific modules, such as commerce, construction, manufacturing, field service, and distribution. Acumatica sells these editions through a network of value-added resellers (VARs).

The conference featured a slew of interesting announcements, and we also had the chance to speak to several of Acumatica’s customers in the distribution and manufacturing sectors.

The first announcement in the manufacturing realm is the building out of Acumatica’s Manufacturing Edition, which has been enabled by the acquisition of manufacturing partner JaaS Systems. JaaS has an established solution for make-to-stock, make-to-order, engineer-to-order, project centric, batch process, and repetitive manufacturers. Acumatica has had a partnership with JaaS for years, so the acquisition was not a surprise. Financing for the acquisition came from Acumatica’s new owner, private equity firm EQT Partners. (For more on that deal, see IFS and Acumatica Moving in Together in the ERP Space.)

HemaSource Touts Acumatica’s Ease of Use

Growth was a big theme of the conference, and it wasn’t just in the record-setting attendance. Customers we spoke to also described how implementing Acumatica has helped them grow.

One such customer is HemaSource, an industrial distributor of disposable medical supplies and also a logistics solution partner. Since implementing Acumatica in 2015, the company has gone from $60 million in annual revenue to more than $200 million.

James Rollins, HemaSource’s director of software solutions, said the long-term growth of HemaSource was a major factor in the Acumatica selection. He first started evaluating Acumatica and other ERP systems in 2015. He was replacing an old accounting system that the company had used since the 1990s.

“One of the key things that I put forth as a driving requirement was, we have a vision to grow and become something bigger than we are,” Rollins said. “So I do not want to focus on specialized ERP systems that are focused on specific industries. It needed to be a general purpose one, but obviously it needed to support our business requirements.”

HemaSource had built a proprietary online order entry system, and Acumatica worked the best with that system, Rollins said. That ease of use allowed HemaSource to substantially scale up its web orders.

Rollins said one of the things he appreciates most about the Acumatica platform is its ease of use. He particularly likes how easy it is to add customizations with a low-code/no-code approach.

“One of the ways in which Acumatica has been very helpful is the platform. Every time we’ve run up against a custom need or some situation where we need to add an addition to what a screen does, we get together with our Acumatica partner, PC Bennett, and we quickly build extensions and customizations to those screens to fit our environment better. That works well. And it’s going to get even easier. Even though the platform is powerful, it still required a fairly powerful developer, somebody that actually knows the .NET platform and C-Sharp to build customizations. Acumatica is adding lots of tools where you can extend it without actually doing any deep programming.”

Rollins said his team now leaves the more difficult customizations to their partner, while his team picks up the quick-and-easy ones. Asked what he would do differently when implementing Acumatica, Rollins said he would have started sooner on a big integration project.

“We’ve just completed a very large project to build a gateway between Acumatica and an integration-platform-as-a-service [IPaaS] solution. If I could go back, I would have started that project day one, because it’s not only business-to-business integration, but we are trying to turn it into a competitive advantage. We’re reaching out to our large customers and creating very strong integrations between the two of us that would make it so that they want to remain with us for the foreseeable future. So we’re partnering with our customers to build these integrations, and we needed a better tool set.”

Rollins said one of his goals for 2020 is to fully implement Acumatica’s CRM module. He’s already licensed it but has delayed a full implementation due to other priorities.

Acumatica Rides to the Rescue for Saddleback Leather

Saddleback Leather switched from a competing cloud-based ERP system to Acumatica in October 2018. For him, two key drivers are Acumatica’s usability and that fact that his retail site works faster and more efficiently now. Regarding usability, he said:

“With [the old system] we found that employees were going to Excel and doing Google docs and spreadsheets and stuff because they couldn’t remember how to do it. It wasn’t user friendly. With Acumatica, the number one thing it has going for it is that it’s user friendly. They put a lot of thought into the usability.”

Munson is a colorful Texan, and he likes his metaphors. To illustrate his usability point, Munson used the metaphor of a TV remote control.

Munson did not enjoy his previous cloud-based ERP system, to put it mildly. Switching to Acumatica and Magento for e-commerce has paid big dividends. His retail website works much better now, he said.

“It’s easy with Magento and Acumatica. It wasn’t like that with [the previous ERP]. We couldn’t get on Google Shopping. All these places that connect our stuff to Amazon … we couldn’t do it because we were on [the old system]. Now we can, because we’re on Magento with Acumatica.”

Once the company obtains ISO certification, he thinks the plant will increase capacity. “As soon as we get that certification, then the bigger businesses will say, ‘Hey, can you make my bags too? Hartmann, Coach, that sort of thing.”

ERP offerings in the cloud have, until recently, have been slow to tackle the manufacturing space. There are at least two major reasons for that: First, the needs of manufacturers are more difficult to satisfy in that there are so many types of manufacturing. In contrast, a sector such as professional services is simpler, so it is an easier starting point when developing an all-new ERP system. Second, because ERP started in manufacturing, the established legacy players are more difficult to displace. From the standpoint of functionality, the legacy ERP vendors have had decades to build out their functional footprint, and it takes time for cloud players to achieve parity.

As demonstrated by the big crowd at the Cosmopolitan Hotel and Casino in Las Vegas, Acumatica’s recent growth has been impressive. The fact that it is now owned by EQT partners has clearly let the company stretch its development legs and begin to sprint. The quality manufacturing solution in development is a smart move that broadens the company’s product offerings. It could be a huge boost to underserved segments and allow Acumatica to move farther upstream in the midsize market. Acumatica deciding to attack the manufacturing space shows that it thinks it is ready to enter a higher level of competition.