Way back in 2007, IT personnel represented more than half of all IT operational spending. Fast forward to 2017, that number declined to 42%. That is one major finding of a new report, in which Computer Economics analyzed long-term IT spending and the effects of the cloud. And based on our analysis of IT organizations that are already well down the road in their cloud transformation, we could see spending on IT personnel comprise less than one third of the total IT budget within the next 10 years.

In Figure 2 from the full study, Long-Term Trends in IT Spending and the Impact of the Cloud, the decline of personnel expenses as a percentage of IT operational budget is clear. However, this is the composite of all companies. Companies that have aggressively adopted the cloud spend even less on personnel—31% of their operational budgets. 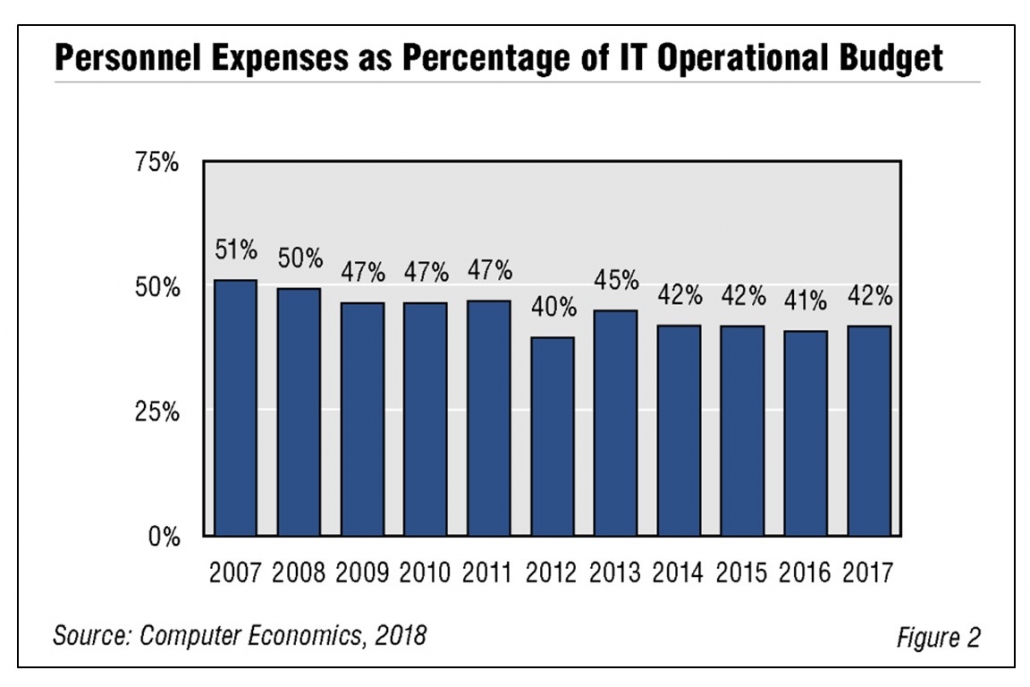 “It isn’t necessarily that cloud-friendly organizations are cutting personnel,” said David Wagner, vice president of Irvine, Calif.-based Computer Economics. “But with the innovations and scale brought on by cloud, virtualization, and automation, they don’t need to grow staff as quickly. Instead, they can spend more money on applications and other technology that add to the capability of the organization.”

Overall, the report shows that the IT spending mix is in major transition because of the cloud, and the transition is likely to continue for some time. IT leaders and financial managers need to be prepared for significant changes to the budget and the needs of the enterprise in the future. Other spending changes include decreased spending on data center infrastructure and increased spending on network infrastructure.

The full report examines the 11-year trend in spending for application software, IT personnel, data centers, networking, and other categories, and how cloud computing is changing that mix. We also look at trends in software-as-a-service spending and the efficiencies gained by cloud computing. The goal is to show what the current IT spending mix looks like and what a potential future spending mix might be when the majority of IT organizations are more fully committed to the cloud. In this way, IT leaders, planners, and financial managers can plan for the IT budget of the future. We also provide advice to IT financial managers and leaders for how they should address these changes within their organizations to best prepare for the future and to align spending to strategy.

This Research Byte is a brief overview of our report on this subject, Long-Term Trends in IT Spending and the Impact of the Cloud. The full report is available at no charge for  Avasant Research subscribers, or it may be purchased by non-subscribers directly from our website (click for pricing).