Some analysts have been anticipating that data center jobs could be in long-term decline. Next-generation data centers built by cloud service providers such as Amazon and Google have incredibly low levels of support staff, and trends such as data center consolidation, virtualization, outsourcing, and data center automation contribute to higher productivity.

Until recently, our data had not provided evidence that these trends had significantly influenced server support staffing requirements for most organizations. In fact, when viewed as a percentage of the IT staff, data center personnel actually rose during the early part of the recession as IT organizations reduced staffing in less critical areas. While data center staffing may not have been actually rising, it also did not appear to be suffering from secular decline.

However, that trend reversed itself in 2011. Figure 1 from our study, Server Support Staffing Ratios, shows the server support staffing ratio took a sharp drop at the median level from 13.3% in 2011 to 11.5% in 2012. The reversal came as IT budgets began to recover, and the sharp decline reflects renewed growth in areas such as networking and application development staffing. 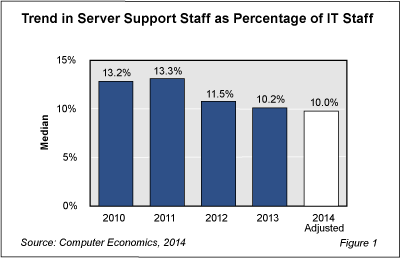 Since then, however, we see a more gradual confirmation of the trend. Since 2011, there has been a downward movement in the median ratio for server support staff as a percentage of the IT staff, from 11.5% in 2012 to an adjusted ratio of 10.0% in 2014. This decline may indicate that outsourcing, low levels of investment in data center infrastructure, and cloud computing is beginning to take its toll on server support staffing levels.

We caution that the median for 2014 has been adjusted to account for a change in our survey. In 2014, we created a new staffing category for communications personnel, and some of these IT staff members were drawn from the server support group. As such, we adjusted the 2014 median upward to make the data comparable with previous years. Still, while based on an estimate, the data suggests there is downward pressure on the server support staffing ratio.