Home » Product » DRP Testing Is Not Adequate In Many Organizations

DRP Testing Is Not Adequate In Many Organizations

Disaster recovery planning (DRP) is one of the most critical responsibilities of IT management. In todayâ€™s competitive business world, organizations have become almost totally dependent on an uninterrupted flow of information between the various applications and systems that manage and run day to day business activities. Developing an IT infrastructure that will guarantee a high level of service availability (even in an emergency) requires the development an effective DRP strategy as well.

A key component of a successful DRP strategy is the creation of a comprehensive testing plan that will ensure that all phases of the plan will execute properly when called upon in an emergency. Additionally, a successful DRP testing strategy will provide other benefits such as:

In 4Q02, Computer Economics surveyed a large number of CIOs and senior IT managers about their DRP strategy. While 74% of the survey respondents indicated they have developed a formal DRP strategy, an alarming number reported that they have not accomplished a hot site test in the past 12 month period. The results of the survey are shown in Figures 1 below.

Has Your IT Organization Performed a Hot Site Test of Your Disaster Recovery Plan in the Past 12 Months? 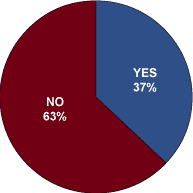 It may not be practical to perform a hot site test every year, but various elements of the plan must be tested at least on annual basis. This can be accomplished to some extent in less intrusive ways than â€œpulling the plugâ€ and performing a full, hot site test. Incorporating testing approaches such as cycle, simulation, desktop, and parallel testing into an overall testing plan can help lower the overall cost of testing and stretch the interval times between testing the entire plan in a live, hot site environment.

However, it is an advisable strategy to perform a full, hot site test on a regularly scheduled interval – probably no less than once every two years. The high number of respondents in our survey that indicated they have not performed a hot site test in the past twelve months would tend to indicate that many organizations are not currently testing their plans as often as they should.