Home » Product » IT Salary Growth Slowing But Still Positive in 2009

IT Salary Growth Slowing But Still Positive in 2009

Rising unemployment is causing anxiety throughout many IT organizations, particularly as they view layoffs among leading technology firms such as IBM, Sun, Dell, Oracle, and even Microsoft. With the tech-led recession of 2000 still fresh in the minds of IT managers, many are concerned about their own future and whether significant cuts will be needed in their own organizations.  In such an environment, salary cuts may appear to be more likely than increases.

Yet our analysis indicates that, in real terms, IT workers could come out ahead in 2009 if inflation remains in flat or negative territory throughout the year, as many predict. The Computer Economics 2009 IT Salary Report projects that median base pay for IT managers and staff will actually increase slightly in 2009, driven mostly by annual cost-of-living raises that IT organizations will award to existing employees. As shown in Figure 1, we project median salary growth for all IT employees will be about 2% in 2009. We also forecast that base pay levels for IT executives, directors, managers, and developers will rise from 2% to 3% this year, while median base wages for other IT workers will rise from by 1.5% to 2.5%. 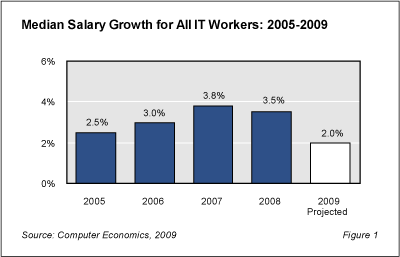 The Computer Economics 2009 IT Salary Report is based, in part, on an annual survey of IT organizations that we conducted during the fourth quarter of 2008. This survey provides information on actual base salaries paid to IT workers, as well as respondentsâ€™ plans for raising salaries in 2009. We also draw upon our own historical data and data from the U.S. Labor Departmentâ€™s Bureau of Labor Statistics to create a statistical model based on the relationships among job titles and metropolitan areas. This statistical model and the survey data is used to project 2009 salaries for 70 specific IT functions by metropolitan area. Additional analysis on IT employment trends is derived from our annual IT Spending and Staffing Study, along with special surveys on IT retention and recruitment practices and IT budgeting and spending trends conducted over the course of 2008.

IT Organizations Resist Significant Layoffs So Far
We took a number of factors into account when projecting 2009 IT wages, among them the stability of the IT workforce. Despite rising unemployment and deflationary pressures in the economy, we believe that IT professionals are faring better than many other occupational groups.

As the recession unfolded over the past year, IT managers pulled back on capital spending, delayed projects, froze hiring, and reduced use of outside contractors. But when it came to reductions in IT staffing, organizations have so far resisted major cutbacks. As late as the fourth quarter 2008, our surveying found most organizations continued to anticipate that IT staffing levels would remain much the same in 2009 as in 2008. While few organizations were planning to add staff, fewer still were planning layoffs.

Keep in mind, however, that these expectations were as of our October survey. The U.S. economy has continued to weaken since the time of that survey. Early results from our annual IT spending and staffing survey, now in progress, indicates that expectations of IT executives have turned more negative than indicated in Figure 2. 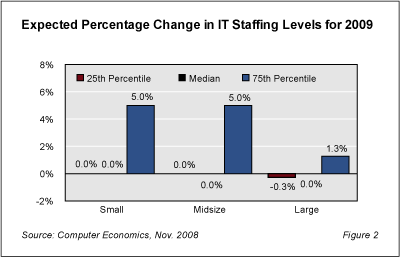 According to our analysis, IT organizations have been cautious about adding staff since the last recession, when the technology sector led the downturn. Through greater use of outsourcing, data center automation, and other strategies, IT has been running lean — learning to make do more with fewer workers — for several years now. We also believe that as companies cut headcount generally, they become even more dependent on technology to get work done. As such, IT organizations are doing their best to hold on to experienced technical staff.

Actual Wage Growth Likely To Trail Planned Pay Raises
Our 2009 survey of IT salaries found that the median pay raise planned for U.S. IT workers this year is 3.0%. However, there is good reason to suspect actual pay raises received by typical IT workers will be somewhat lower than the planned pay raises indicated by our survey respondents. In recent years, rising wages have barely kept pace with inflation. But, with moderating energy prices and potential deflation, a 3.0% salary increase would represent growth in real terms. This is one reason our projected median wage growth of 2.0% is somewhat lower than the pay raises many IT organizations plan to give their IT workers.

Another reason why pay raises for existing IT workers may be higher than median salary growth is that, in a recession, businesses will bring in new hires at lower salaries than what they are paying existing employees with similar skill sets. Wages are “sticky.” Businesses are generally reluctant to lower wages in response to market conditions because of the negative impact on morale. For similar reasons, businesses are inclined to meet expectations for annual raises. Because of this stickiness, median salaries paid by organizations to incumbent employees in times of recession are likely to be higher than market rates for similarly skilled candidates.

Our survey also shows that the median planned pay raise for each group within the IT organization is close to the median for all IT employees. This flattening of the variance in median pay raises is an indication that most organizations are planning cost-of-living hikes designed to maintain morale and reward performance rather than responding to labor supply issues.

Salaries for Managers, Developers to Outpace Other IT Employees
While the median planned pay raise is roughly the same for eight functional groups in our survey, average pay raises tell another story. As shown in Figure 3, executives and directors, managers, and developers are getting higher increases than other groups. In some organizations, they are getting substantially higher increases, which are pushing the average above the median. Average pay raises for network support, server support, desktop support, help desk, and administration staff are all closer to the median planned pay raises for all IT workers. 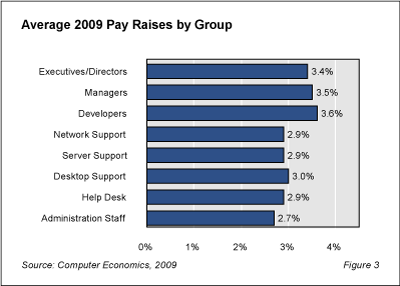 The higher-than-average pay increases for developers indicates application programmers, architects, database programmers, and certain other skill sets remain in short supply. Despite a slowdown in new system implementation, organizations are continuing to renew legacy applications and improve e-commerce and other customer-facing systems that provide competitive advantage and lower cost of sales. 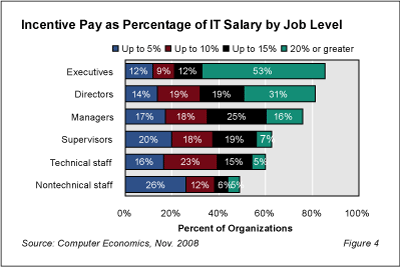 There is also evidence that other forms of compensation such as healthcare benefits and matching 401K contributions are declining as a percentage of total compensation. According the Bureau of Labor Statistics, wages and salaries for all U.S. workers rose 2.9% in the third quarter 2008 year over year, while total compensation rose at a slightly lower rate of 2.8%.

The rate of median wage growth can fluctuate significantly from region to region due to variations in cost of living, economic growth, and labor supply. According to our projections, however, we also see a flattening of growth rates among the various regions, compared to prior years.

While median wage growth for IT employees will slow considerably in 2009 compared to the last three years, we still anticipate modest growth for most job functions. IT wages experienced no growth and, in some cases, declines following the last recession and only began to recover in 2004. But that recession was led by the technology sector. The subsequent tightening in the labor supply and drive to improve data center productivity has put IT organizations in a better position to respond to this recession. In this unpredictable environment, however, forecasts are subject to revision. The longer this recession persists and the deeper it goes, the more rising unemployment, bankruptcies, and deflation will conspire to put downward pressure on IT salaries, as it will for salaries in other occupational groups.

This report is based upon our 2009 IT Salary Report, which provides 2009 base salaries for 70 specific IT job titles in 73 U.S. metropolitan areas. Salaries are reported at the 25th percentile, median, and 75th percentile for small and midsize-large organizations.

The 2009 IT Salary Report is available at no charge for Computer Economics clients, or it may be purchased by non-clients directly from our website at https://avasant.com/report/2009-it-salary-report/ (click for pricing).