Wage increases for IT jobs in recent years have been modest, and the coming year looks to be no different. Although there are always exceptions for hard-to-find skills, IT organizations are not adding greatly to overall headcounts, which is keeping a lid on overall salary increases.

Overall, our 2017 IT Salary Report anticipates that IT workers at the median will receive a pay raise in the neighborhood of 2.8%, as shown in Figure 1 from the executive summary. 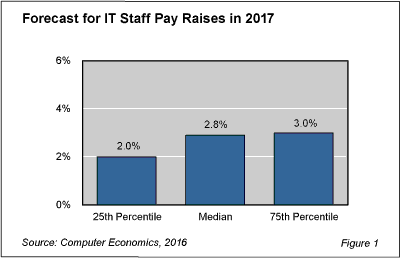 By way of comparison, the U.S. Labor Department’s Bureau of Labor Statistics (BLS) reports that total cost of employment for all civilian workers rose 2.3% for the 12 months ended in September. Real wages are also beginning to recover. The Labor Department said its Consumer Price Index increased 0.4% in October. In the 12 months through October, the CPI advanced 1.6%, the biggest year-on-year increase since October 2014. Despite that increase, our benchmarks for IT salaries in 2017 assume a continuation of the low-growth environment for wages and inflation that we have seen during the previous four years.

“It’s déjà vu all over again for most IT workers,” said Tom Dunlap, research director of Computer Economics. “Employers are for the most part holding the line on pay increases, hitting about the same number as last year. The improving economy just has not yet translated into significant pay increases for most IT workers. Efficiencies with cloud computing, Software-as-a-Service, and automation are clearly having an impact on hiring and salaries.”

The full report estimates 2017 wages for 69 IT job functions for more than 400 U.S. metropolitan areas. We publish the salary tables in Excel format. The report is based on a study that draws information from our annual salary survey of about 100 IT organizations in the U.S., our IT spending outlook survey for 2017, our annual IT Spending and Staffing Benchmarks study, and the BLS’s compensation data. That data, which draws upon a sample of about 1 million state unemployment insurance records, enables us to extrapolate from our estimated national median wages for specific job functions to compensation for those same functions in various cities, counties, and regions around the country.

This Research Byte is a brief overview of our report, The Computer Economics IT Salary Report 2017. The full report is available at no charge for Computer Economics client or may be purchased directly from our website (click for pricing).