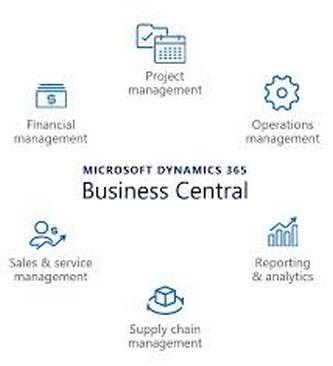 Microsoft is attempting an ambitious plan to converge a wide swath of business tools under one unified umbrella called Microsoft Dynamics 365 Business Central, a platform that serves as the successor to its Dynamics NAV ERP system.

Microsoft says the experience for its on-premises customers should be no different from Dynamics NAV upgrades, except for the name change. The new hub is essentially a convergence point for Dynamics products for small businesses, and, going forward, they will all be considered customers of Business Central, in the cloud or on-premises, even if customers are running differently branded products.

GP, SL Core Functionality Not Migrating to the Cloud
Microsoft claims that customers can pick their flavor of Business Central, or use their existing on-premises solution. But reading between the lines, if a small business wants a modern, 100-percent-cloud ERP from Microsoft, they will need to move to Business Central, which is essentially the next version of Dynamics NAV. While Microsoft’s other ERP systems for small businesses—Dynamics GP and Dynamics SL— will still be supported and upgraded, they are only available for deployment on-premises or hosted by a partner. Customers can connect those on-premises or hosted deployments to Business Central to take advantage of other Microsoft services, such as the IoT Central, Azure Services, and PowerApps, but GP and SL core functionality will not be part of Business Central.

Microsoft has gone to a yearly release cycle for both GP and SL, with the former getting an update in late 2018 with the latter scheduled for the spring, said Errol Schoenfish, director, product marketing.

Regarding what is happening with Dynamics GP and SL, Schoenfish said: “Our intent … is to provide a clear path for a ‘Cloud, Managed by Microsoft’ solution, if that makes sense for our customers. And we feel this path will be the least disruptive while giving customers the benefit of the cloud at the edge for IoT, Azure services, Power Suite, etc.”

Many Dynamics NAV customers will undoubtedly be scratching their heads over what the change means to them. Schoenfish tried to reassure them:

Microsoft is hoping to position Business Central as much more than just a successor to Dynamics NAV. At its recent Business Applications Summit in Seattle, the company said Business Central users will get a streamlined and refreshed user experience with many productivity improvements, with access to other Dynamics 365 solutions. Schoenfish summed it up:

“Business Central is an all-in-one business management solution that encompasses a number of different areas to solve problems within an organization, across financial management, job tracking, soft project management, manufacturing, service management, warehouse, distribution. It has some capabilities for what I would call sales and marketing. It is a fully cloud-based, multi-tenant solution managed by Microsoft.”

‘Crazy Naming Process’
Will the new handle put a dent in the ERP-naming bloat at Microsoft? Business Central was at one point codenamed Dynamics 365 Tenerife, while the most recent NAV system is called Dynamics NAV 2018 R2. That’s not even mentioning all the flavors of Dynamics AX, GP, and SL. Schoenfish admitted that has been a problem.

“Two and a half years ago we started this really crazy naming process. We came out with Dynamics 365 for Financials, Business Edition. It’s built off of Dynamics NAV as a platform. It actually did not have the full functionality that’s currently in the solution. Our partners said, ‘Well, it’s more than just finances.’ So we renamed it Dynamics 365 for Finance and Operations, Business Edition. That was fun.”

With Business Central, he said that Microsoft focused on getting information to all users in a company.

“How do I get all of the really pertinent information in an ERP solution out to everyone within the organization, so it’s not just the accounting manager that has that information? That it’s everyone. It’s inclusive of owners, sales people, all the warehouse people, etc.”

Outlook Gets Increased Functionality
An example of that information access is the increased functionality coming to Microsoft Outlook, which features tighter integration with Office 365 and other Dynamics 365 tools. “It’s important, when we talk about connecting people, to do it in the applications that make sense,” he said. Schoenfish showed a demo of sales and customer information that is being added to the body of an Outlook email.

He put on the hat of a business owner who has grown his outfit from five to 155 employees but is still involved in the day-to-day running of the business. Schoenfish showed how Outlook can access sales data and capitalize on AI, using a mock email from a customer who is asking for a quote.

“I can see all of the historical information about this customer, including ongoing sales quotes, how they’re doing on their overdue payments, etc. All of that is available in Outlook. But what’s different is the ability to actually do something. In this case, create a sales quote. This is now the system being intelligent. It actually looked at the email and said, ‘Hey, I recognize a couple of things in the body of that email. I recognize inventory items.’ As a result it’s saying, ‘do you want to put these in a quote?’”

Playing to its SMB Strengths
Microsoft’s Dynamics 365 Business Central is part of a broader, increasingly competitive trend in the industry of packaging many cutting-edge business solutions into one end-to-end central repository.

It comes as the software veteran has made impressive gains in its Azure Cloud and enterprise apps initiatives, particularly Power BI and PowerApps. If it can successfully meld all of its solutions into Dynamics 365 Business Central, it will extend Microsoft’s strengths in the SMB market. At the same time, Business Central could potentially simplify the alphabet-soup of Microsoft ERP monikers (as long as it doesn’t add “Enterprise Edition” to the name).