Security Threats in Employee Misuse of IT Resources

As organizations increase their use of information technology to do business, employees and other insiders are using computers and the Internet more and more in their day-to-day work. Although these computing resources can greatly increase worker productivity, they can also be misused.

This Research Byte is adapted from the executive summary of our full report, Insider Misuse of Computing Resources, which analyzes 14 forms of insider misuse in detail. Based on our survey of 100 IT security professionals and executives worldwide, the full report analyzes the threat of insider misuse of computing resources–that is, any violation of an organization’s policies regarding acceptable use. For each of 14 types of insider misuse, we analyze the perceived seriousness of the threat, typical organizational policies or lack thereof, frequency of violations against company policy, analysis of preventive and detective actions taken by organizations to deter the misuse, and typical levels of enforcement.

The threat of insider misuse goes beyond loss of productivity. Some forms of misuse also expose the organizations to more sinister threats. For example, surfing the web can bring users to websites that contain malicious code, opening the user’s desktop and network to infection. Participating in peer-to-peer file sharing networks can do the same. Storage of pirated music, video, or unlicensed software exposes the organization to copyright violation liabilities. There are many other examples of the threats to security that can directly result from failure to reign in insider misuse of computing resources. While many organizations are sensitive to the need to defend against information security threats originating from outside the organization, the threat posed by insiders misusing computing resources can be just as great or greater.

Understanding the Threat of Insider Misuse
Insider misuse, as defined in this report, is not necessarily malicious behavior. Individuals misusing the organization’s computing resources are for the most part not doing so with the intent to harm the organization. They may just be attempting to “get the job done.” For example, an employee may use his personal laptop to bring work home over the weekend in spite of the organization’s ban on use of personal computing devices for business purposes.

Insider misuse does not need to be malicious to pose a threat to the organization. The study shows a number of ways that violation of an organization’s acceptable use policy may result in harm. Making insiders aware of these threats is an important part of mitigating the risk of insider misuse as we discuss later in the full study.

How Serious Is the Threat of Insider Misuse?
Before delving into our analysis of each threat, it is useful to examine them in total. For this analysis, we look at all types of insider misuse and rank them according to the perceived seriousness of each threat. Figure 1 shows the 14 categories of insider misuse ranked by the percentage of organizations viewing each as a “major threat.” 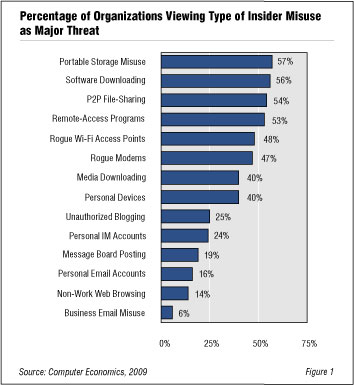 In our survey, we asked respondents to rate the “seriousness” of each category of insider misuse as no threat, a minor threat, moderate threat, or major threat. We recognize that the word seriousness has no formal definition in risk management. Typically, risk management professionals quantify risks by their “severity” (potential harm) and the “likelihood” of experiencing an incident within a given timeframe.

However, because many forms of insider misuse are not readily quantifiable, we use the word “seriousness” to gauge how concerned IT security professionals are with each threat. We believe the seriousness level provides a useful measure of the perceived importance of each threat, while being mindful that perception and reality are not always consistent.

In assessing the seriousness of each category, we asked respondents to consider all forms of potential damage to the organization, such as effect on system availability or integrity, network performance, legal liability, disclosure of confidential information, loss of worker productivity, and damage to the organization’s reputation. In addition, we asked respondents to evaluate these threats without consideration of any countermeasures their organizations were taking to deter misuse.

What do these forms of misuse have in common? They all pose a threat primarily in terms of loss of information, security breaches, and legal liability. For example, unauthorized copying of files is a threat as it may lead to loss of confidential information. An employee using his own laptop for business purposes may inadvertently take confidential information home at night or retain this information when he leaves the organization. Downloading unauthorized software or using P2P programs may introduce malware into the organization, leading to theft of information or loss of system availability. It is not difficult to envision the seriousness of the threats that these forms of misuse pose to the organization.

There is a significant gap between this first group and the bottom six categories. Only 25% or fewer of our respondents considered these as major threats. This group includes unauthorized blogging or participating in message boards concerning the organization’s business, instant messaging using personal accounts, non-work-related web browsing, and using the organization’s email system for personal matters.

The forms of misuse in this second group are perceived as less serious threats than those in the first group. The perceived threat in the second group is primarily loss of worker productivity. One may argue that some of these forms of misuse also lead to loss of confidential information—for example, an insider blogging about the organization’s business without authorization could disclose trade secrets. Or an insider using a personal instant messaging account through the corporate network could introduce malware into the organization. Nevertheless, our respondents do not view these forms of misuse as being as serious as those in the first group. Whether these forms of misuse should be treated more seriously is a subject for analysis in the full report.

Sample of Key Findings
The bulleted points below summarize some of the findings of the full study:

The full report analyzes these trends and statistics on the 14 categories of insider misuse in more detail. We also analyze the prevalence of certain practices in enforcing policies. These practices include methods to increase awareness of policies, email monitoring, keystroke logging, examination of insider computer files, and monitoring of Internet traffic. We also analyze the types of websites that organizations typically forbid, restrict, or monitor.

This Research Byte is adapted from the executive summary of our special report, Insider Misuse of Computing Resources. The full report is available at no charge for Computer Economics clients, or it may be purchased by non-clients directly from our website.

Please refer to the extended report description for the full table of contents and list of figures for this report.