Trends in IT Incentive Pay

The development of incentive pay plans turned into a minor industry over the past decade as business managers became enamored with the idea that paying for performance could increase productivity. While there is merit to the strategy, there has also been a growing awareness that ill-conceived incentive pay programs can have negative consequences and that money is not always the best way to motivate employees. The incentive pay debate is intense and has strong advocates on both sides.

This Research Byte is a summary of our full report, Pay for Performance: Popularity and Impact of Incentive Pay in the IT Workforce.

We define incentive pay as a variable reward based on measurable performance or output. There are three ways to measure output: quantity, quality, and timeliness. A programmer, for example, could earn incentives based on the number of lines of code produced, errors detected, or deadlines met. Organizations can also base incentives on individual, team, or company performance. While a profit-sharing program may have far different objectives than a sales commission, what they share is variability. Compensation rises and falls with output rather than by hours worked.

Not all incentive programs are performance-based. For example, a program that boosts an IT worker’s pay for earning a certification is not variable. Once earned, it is retained and constitutes a pay raise. In addition, we consider programs that hand out prizes for specific objectives such as recruiting new employees or contributing useful ideas to be “employee recognition” or “rewards” programs, not incentive-pay programs. As this report focuses on performance-based incentive programs, we did not consider these other types of programs in the study. 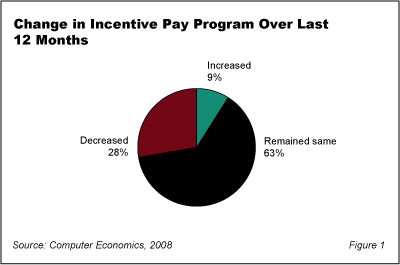 Computer Economics Viewpoint
Despite signs of economic cutback, the practice of including all employees in incentive programs is widespread. The most common form of incentive pay, though, is based on company performance. While such programs have the advantage of being relatively easy to administer and variable in nature, they are not likely to lead non-managerial employees to work longer, harder, or smarter. However, they may be desirable for increasing loyalty and job satisfaction or improving recruitment and retention.

The full version of this report provides recommendations for structuring workgroup incentives and individual performance incentives. We also highlight the need to balance the need for improved performance with the potential impact of incentive pay programs on IT employee turnover.

This Research Byte is a brief overview of our report on this subject, Pay for Performance: Popularity and Impact of Incentive Pay in the IT Workforce. The full report is available at no charge for Computer Economics clients, or it may be purchased by non-clients directly from our website at https://avasant.com/report/pay-for-performance-popularity-and-impact-of-incentive-pay-in-the-it-workforce-2008/ (click for pricing).

This study is the last in a three-part series on IT personnel management issues. Earlier studies in the series included Factors Influencing IT Employee Turnover Rates and Current Trends in Telecommuting Among IT Workers.