Home » Product » Use of Linux Growing in Corporate Data Centers

Use of Linux Growing in Corporate Data Centers

According to statistics gathered in the Computer Economics 2005/2006 Information Systems Spending & Technology Trends study, the use of Linux continues to increase in corporate data centers.

While many organizations have thus far limited the deployment of Linux to a secondary or tertiary role in the data center, it is clear that Linux has already achieved a solid foothold in the enterprise and will continue to expand in use. As shown in Figure 1, 36% of the data centers that participated in our 2005/2006 Information Systems Spending & Technology Trends study use Linux for at least some applications. 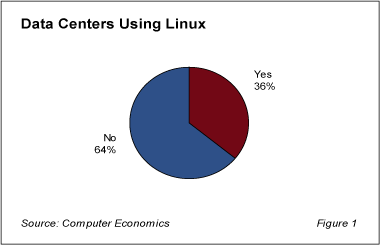 While early enterprise adoptions of Linux were limited to managing file services, print services, and messaging workloads, Linux is increasingly found as a platform for a variety of mission-critical functions such as database management and major application systems, including enterprise resource planning (ERP) and customer relationship management (CRM). Major vendors such as SAP and Oracle now fully support Linux. In many respects, Linux has reached a level of maturity that now places it on par with commercial UNIX products, such as AIX, HP-UX, and Solaris, as well as high-end Windows environments.

It is hard to argue that Linux is not ready for prime time.  Some industries, such as the financial services industry, have been actively implementing Linux for several years. On Wall Street, Linux has moved far beyond small, non-essential applications to true enterprise class systems, where it supports the high performance real-time transaction processing requirements of several large brokerage firms. Although such firms are notoriously tight-lipped about their technology initiatives, it appears that enterprise-class Linux systems are fully operational at Credit Suisse First Boston, Merrill Lynch, Morgan Stanley, and Reuters. Vendors pushing Linux on Wall Street include HP, Oracle, Sun, and IBM, the latter maintaining a porting and testing center in New York to help firms migrate to Linux.

Other organizations are going fartherâ€”a total migration to Linux. For example, the German national railway, Deutsche Bahn, has successfully moved all of its 55,000 Lotus Notes users to Linux. This is the first major milestone of an ambitious program to move the entire organization to Linux.  The company has already migrated its train scheduling systemâ€”a core mission critical systemâ€”from HP Non-Stop to Linux. It is now moving its deployment of SAP to Linux, and will migrate all of its remaining critical systems by the end of 2005.

Factors Driving the Move to Linux
As an open source product, Linux is commonly thought of as a low-cost alternative to proprietary operating systems, such as Microsoft Windows or the various flavors of UNIX. Although the low initial acquisition cost of Linux is certainly a factor driving its deployment, there are other characteristics of Linux that users find attractive: its vendor neutral position, the wide variety of processors that Linux can run on, the active support and promotion of Linux by major IT service providers such as IBM, HP, and Novell.

This Research Byte is abstracted from our full report, Linux Thrives in the Enterprise, which is available as Featured Research for Computer Economics clients. Non-clients may purchase this report on a one-time basis. The full report includes a detailed analysis of the ROI and TCO experiences of our survey respondents as well as practical advice for those organizations contemplating a migration to Linux.