Fewer than Half of IT Organizations Adding Headcount This Year

The rate of IT spending growth is slowing this year, and the culprit appears to be weakness in IT hiring plans. Fewer than half (46%) of all companies in the newly released Computer Economics IT Spending and Staffing Benchmarks 2016 study are planning to increase IT headcount. This is a drop from 2014 and 2015, when 52% and 50% of respondents, respectively, were adding to IT staff counts. It is not a dramatic pullback in hiring, however. Only 19% are planning to actually cut staffing levels, as shown in Figure 1-13 from the full study. 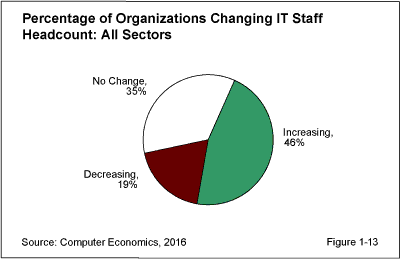 Macroeconomics factors and the slow 1st quarter are likely a major part of why hiring isn’t increasing at a faster rate. While operational budgets are still growing, they are increasing at a rather unimpressive 2%, not much different than overall economic growth. This leaves little room for major personnel increases.

“Economic uncertainty makes it difficult for companies to be more aggressive in hiring new IT staff members,” said Frank Scavo, President of Computer Economics. “At the same time, virtualization and cloud services are making IT personnel more efficient, which softens the effect.”

For the most part, IT departments are still deploying staff the same way they have in the recent past, with the staffing mix holding relatively constant. The largest portion of IT staff is dedicated to application development and maintenance, representing about a quarter of the staff. The next largest portion of staff is IT managers, with over 10%, and help desk workers at 9%. While app developers and maintenance workers continue to grow in the IT department, server support headcount has seen a steady decrease in the last five years, from 12.1% of the total IT staff in 2012 to just 8.0% this year. Computer Economics attributes this decline to several factors, including increasing use of virtualization and automation tools that improve data center staff productivity as well as the shifting of data center workloads to the cloud. No other positions show a noticeable long term trend up or down.

The Computer Economics IT Spending and Staffing Benchmarks 2016/2017 study is based on a detailed survey of more than 200 IT executives in the U.S. and Canada on their IT spending and staffing plans for 2015/2016. It provides IT spending and staffing benchmarks for small, midsize, and large organizations and for 23 sectors and subsectors. A description of the study’s metrics, design, demographics, and methodology can be found in the executive summary along with the key findings.

This Research Byte is a brief overview of the findings in our report, IT Spending and Staffing Benchmarks 2016/2017. The full report is available at no charge for Computer Economics clients, or it may be purchased by non-clients directly from our website (click for pricing).