Despite the ongoing decline in prices for printers, IT organizations are spending an increasing portion of their IT operational budgets on printing.

Our study Printer Expense Benchmarks and Best Practices shows that over the past four years printer expenses have been rising as a percentage of the IT budget. Figure 1 shows average printer spending remained essentially flat from 2007 to 2008, but then increased from 0.7% in 2008 to 1% of the IT operational budget in 2009 and rose again to 1.3% in 2010. 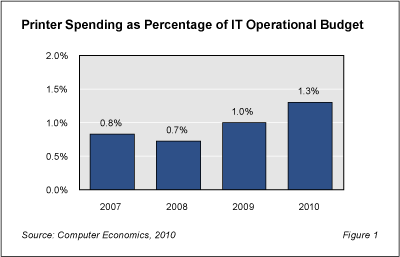 The printer expense category includes service and service contracts, supplies, and depreciation of capitalized hardware acquisition costs. It includes all printers, whether located in data center or user locations. It also includes all types of print devices, including printers, multifunction units, copiers, plotters, and fax machines.

This average rise in spending on printers as a percentage of the IT operational budget is an interesting development because it comes as the cost of printer hardware is declining rapidly, by some estimates as much as 15% on an annual basis for color-print technology. There are several possible explanations: the first is that the decline in unit cost for printer devices spurred additional demand from users and consequent increases in printer expense. Another is that amid the recession, IT operating budgets were cut so dramatically in areas such as personnel, servers, and data services that printer expenditures rose as a percentage of the whole.

Still, the change from 1.0% to 1.3% is significant, representing a 26% increase. Print costs are now in line with what IT organizations spend on business continuity services. The four-year trend line suggests IT managers are not having as much success controlling operational costs associated with printers as they are with other systems, namely servers and PCs. A focused effort at optimizing printer expenses, therefore, could be a hidden opportunity for many organizations.

Due to the ongoing changes in printer technology, print management, and the ways in which employees use printers, IT managers should assess whether their organizations are managing printing resources in the most efficient manner. The full study establishes three benchmarks that enable organizations to assess their print strategies. The benchmarks include printers per user, printer expenses as a percentage of the IT budget, and printer expenses per user. We also examine variances in printer benchmarks by organization size and industry sector. We conclude with recommendations for optimizing print costs.

Our findings show that IT organizations overall are not restraining print costs to the same degree that they are reducing expenses associated with other aspects of the IT infrastructure, despite all of the changes taking place. In addition, we find that economy of scale is not a big factor in efficient management of printing infrastructure–that is, the cost of managing the print infrastructure in small organizations is similar to that of large organizations. Our research also shows that sectors such as insurance, manufacturing, and retail are much more successful in consolidating printers than other sectors such as banking, wholesale distribution, and government.

This Research Byte is a brief overview of our report on this subject, Printer Expense Benchmarks and Best Practices. The full report is available at no charge for Computer Economics clients, or it may be purchased by non-clients directly from our website (click for pricing).