IT operational spending plans are rising in 2015 at the fastest rate since the Great Recession, but IT capital spending remains on hold and hiring is muted in what could signal a broad-based shift to cloud computing.

“There is a notable shift from IT capital spending to operational spending, which is exactly what we would expect as companies move from software licenses implemented on premises to cloud subscriptions,” said Frank Scavo, president of Computer Economics, Irvine, Calif. “Economic uncertainty is also at play, but we think the shift to cloud computing is the greater factor.”

The findings from the executive summary of this year’s Computer Economics IT Spending and Staffing Benchmarks study indicate investment in cloud-based applications is beginning to have a noticeable impact. “IT organizations are investing in new applications, and those applications are increasingly in the cloud,” Scavo said. “What they are not spending money on is data center infrastructure.”

The most positive finding in the study this year is that IT operational budgets are up about 3.0% at the median, marking an acceleration in what has been a gradually rising metric since the end of the recession, as shown in in Figure 1-2 from our annual IT Spending and Staffing Benchmarks study. 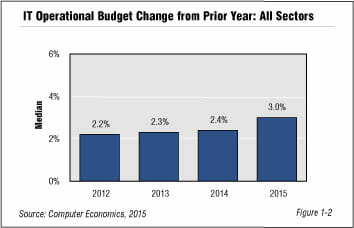 Even with the rise in IT operational spending, however, other metrics are showing IT staff headcount will be flat at the median and IT spending as a percentage of revenue is declining from 2.5% of revenue to 2.3% for the composite sample. The decline in the later metric does not mean IT spending is declining, but only that it is not rising as fast as corporate revenue. Both metrics may be due in part to productivity gains that IT organizations are realizing by the shift to cloud computing noted earlier.

The Computer Economics IT Spending and Staffing Benchmarks 2015/2016 study is based on a detailed survey of more than 200 IT executives in the U.S. and Canada on their IT spending and staffing plans for 2015/2016. It provides IT spending and staffing benchmarks for small, midsize, and large organizations and for 23 sectors and subsectors. A description of the study’s metrics, design, demographics, and methodology can be found in the free executive summary.

This Research Byte is a brief overview of the findings in our report, IT Spending and Staffing Benchmarks 2015/2016. The full report is available at no charge for Computer Economics. clients, or it may be purchased by non-clients directly from our website (click for pricing).