IT Spending as a Percentage of Revenue by Industry, Company Size, and Region

IT spending as a percentage of revenue is a key metric that most organizations use to calculate their IT spending levels. The formula is simple: It is the company’s IT operational spending (including depreciation) divided by the firm’s total revenue. The calculator can also be set up on a cash basis by using total IT spending, including capital spending, and omitting depreciation. Although the calculation is straightforward, it is essential to understand how this metric varies by industry, company size, and region. 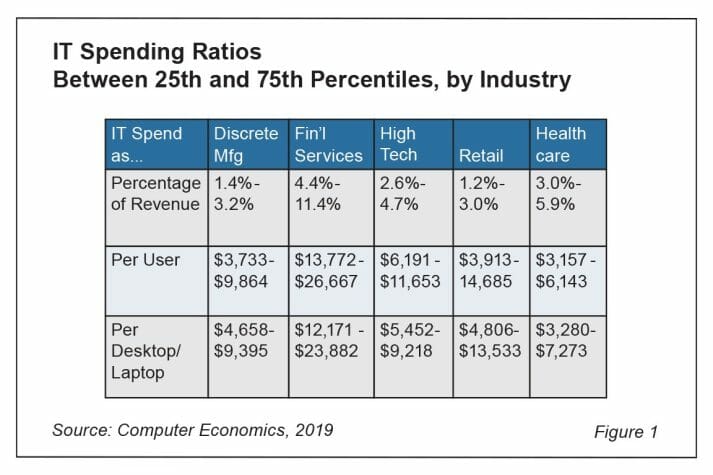 This Research Byte is based on our annual IT spending and staffing benchmarks study, which is based on a statistical data set with over 25 industry sectors. The Executive Summary (60+ pages) of the full report is free. There is also a companion executive summary for Europe.

IT Spending as a Percentage of Revenue by Industry

In considering IT spending as a percentage of revenue, the first important principle is that this metric varies greatly by industry. As shown in Figure 1, IT spending as a percentage of revenue in the financial services industry ranges between 4.4% at the 25th percentile to 11.4% at the 75th percentile. In contrast, discrete manufacturing companies spend 1.4% and 3.2% at the 25th and 75th quartiles, respectively. To put this in sharper relief, a financial services organization at the 25th percentile spends more than a discrete manufacturer at the 75th percentile.

There is no factor more important in the formula for IT spending as a percentage of revenue than industry sector—not company size, not geographic location.

IT Spending as a Percentage of Revenue by Company Size

Therefore, when benchmarking IT spending as a percentage of revenue, look primarily at your industry sector. Then look to see whether your organization size is much greater or less than the demographics of the survey sample. You may be able use this in your analysis to justify a greater or lesser level of IT expenses.

IT Spending as a Percentage of Revenue by Region

Within the U.S. and Canada, our research does not show any difference in IT spending as a percentage of revenue between geographic regions. For example, a midsize manufacturing company in California the West Coast of the United States should not be spending differently than a similarly sized manufacturer in Texas, New York, Florida, or Montreal, Canada. We do not recommend, therefore, that IT organizations attempt to segment a sample by geography. To do so only yields a smaller sample, and the confidence level will be less.

Neither do we see significant differences between North America and European countries or other developed countries. However, we do not yet have a large enough sample to draw conclusions about IT spending in developing countries, such as parts of Asia, South America, or Africa.

IT Spending per Employee, Per User, and Per Desktop PC

One mistake that IT leaders make in benchmarking their IT spending levels is only to look at their IT budgets as a percentage of revenue. To get a more complete picture, it is advisable to use other ratios as well, as shown in Figure 1. For example, look at IT spending per employee—or better yet, IT spending per user. The latter is more significant, because IT organizations must support users whether or not they are employees. Healthcare companies, for example, tend to have many more users than employees. On the other hand, in some companies, especially in manufacturing, not all employees are users of IT.

Another good benchmark is IT spending per desktop (or, per PC/laptop). This can provide another perspective in cases where users have more than one desktop/laptop, users share PCs (e.g. across multiple shifts, for example, in a hospital), or where there are a significant number of desktop computers in laboratories, classrooms, or other shared environments.

Sources for IT Spending Ratios and IT Budget Metrics

Computer Economics offers a wide range of IT spending, staffing, and budget ratios by industry sector and organization size. These are available in our annual IT Spending and Staffing Benchmarks study. Individual chapters are available for over 25 industry sectors and sub-sectors, and for small, midsize, and large organizations. We also have a companion European IT Spending and Staffing Benchmarks study.

For those considering purchase of more than one chapter, becoming a Avasant Research subscriber may be a more cost-effective option, as it gives you discounted access to all chapters, as well as access to all our publications on IT spending metrics, IT staffing ratios, IT outsourcing statistics, technology trends, IT best practices, and other advisory reports. In addition, it comes bundled with analyst support at no charge.

For those who are looking for more hands-on assistance, we offer custom IT benchmarking services, which can be bundled with a website subscription for even greater discounts.