As the recession hit, the network was one area where capital investment came to a halt and IT organizations reduced network support headcount. As shown in Figure 1 from our study, Network Support Staffing Ratios, network support staffing stood at 8.7% of the IT staff in 2007, jumped to 9.5% in 2008, and then fell to 7.7% in 2009. 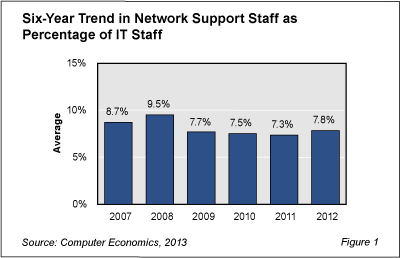 Over the past four years, the ratio of network support staff to IT staff for the composite sample has remained relatively steady, based on our annual survey of more than 200 IT organizations. Network support staff accounted for 7.8% of the total IT staff in 2012, which is about equal to the 7.7% recorded in 2009. The gradual decline in the ratio during the intervening period shows that this function was slow to recover, but the trend now appears to have ended.

In this digital age, the importance of computer networks cannot be overstated. Yet remarkably, as a percentage of the IT staff, the size of the network support staff has been declining over time. The increasing bandwidth demanded by network-hungry applications, rising security threats,  or reliability needed for cloud-based mobile applications has not driven up the basic ratio of network support staff to total IT staff in the typical organization. Rather, as with other infrastructure support functions, the data suggests better technology, automation, and outsourcing are enabling IT organizations to do more with fewer people.

This Research Byte is a brief overview of our report on this subject, Network Support Staffing Ratios. The full report is available at no charge for Computer Economics clients, or it may be purchased by non-clients directly from our website (click for pricing).