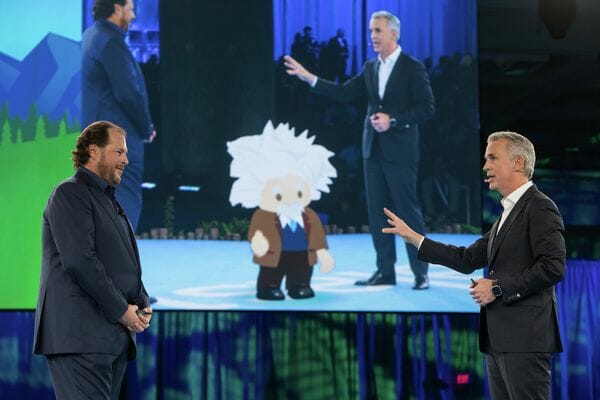 If you are thinking of investing in a new artificial intelligence (AI) capability, be aware that all you are really doing is investing in automation. And that’s entirely OK.

This week at the annual Dreamforce conference in San Francisco, Salesforce was eager to talk about its new AI platform, Einstein. Einstein claims to bring “AI to everyone,” as Salesforce will brag it brought “cloud to everyone,” “IoT to everyone,” and presumably they’ll take credit for bringing the wheel to everyone if you let them.

The virtue of presenting AI as something for everyone is that it starts to reduce the sense that AI is magic or incredibly high-tech and starts to make it seem like just another technology for business.

Salesforce is also claiming that Einstein will make the Salesforce software the “world’s smartest CRM.” This is a closer description than anything you’d readily think of when you think of AI. When you conjure an image of AI, you usually think of a system or a machine that thinks for itself, like a robot in a Hollywood film. Einstein doesn’t really do that, nor do other AI offerings such as Oracle’s Adaptive Intelligence, Microsoft’s Cortana and its recently announced AI, or SAS’s Viya. But it will do things for itself, and more importantly it will do things for you, as you will soon see. That’s why it is best to think of it as automation.

AI for Customer Acquisition
At the Einstein keynote on Wednesday at Dreamforce, Dr. Shubha Nabar, Saleforce’s head of data science, called AI the “the next electricity.” She said, “If you think about the way people described their toasters when they first came out people referred to them as ‘an electric toaster,’ but now we just call them toasters. Pretty soon your smart watch or your smart car is just going to be a watch again. Everything else is just dumb.” That’s the key to understanding the AI revolution. It is so subtle we aren’t noticing it.

At another Dreamforce session, Senior Manager of Product Management at Salesforce Michael Machado pointed out that one of the biggest challenges in artificial intelligence in the 1980s was teaching a computer how to find its way from place to place. Now we have Google Maps. And Google doesn’t even call it AI. In other words, the ubiquity of AI changes the way we perceive it. When Amazon or Netflix give a product or movie recommendation, that is machine learning AI, but we don’t think of it that way. There is no reason to look at enterprise AI or machine learning differently.

At its core, Einstein simply tells sales execs what they already know faster than they could figure it out on their own. Take a simple case where a sales person is checking leads to determine the next course of action. Einstein uses machine learning to rank potential leads. For example, it will alert the rep when someone has taken an online demo, and it will asses the “fit” of that prospect relative to current customers and decide the likelihood that the rep will be able to sell to this new lead. Einstein will then suggest the most successful way to contact that prospect (email, social media, phone), based on any known behavior of the customer. If Einstein suggests email, for example, it will read previous sales emails and construct a response for the rep in a matter of seconds. The rep can approve or edit the email, and when sending it, the system will automatically select the time to send when the prospect is most likely to open it.

Assuming the demo is an accurate representation, you could go through this entire process of reaching out to a new sales lead in roughly a minute. It is a significant time savings. But it’s not the Hollywood-style AI you think of. It is just a smart conglomeration of machine learning we’re starting to get used to in our lives as consumers.

AI for Customer Retention
Salesforce executives demonstrated other features designed to show how Einstein would allow a company to maintain a relationship with a customer. Examples include suggesting content to send to customers, how often and when to contact them, or to even flag certain events that might alter a sales relationship. For instance, Einstein can automatically scan email and flag the sales rep if a new executive has become the decision-maker on an account, and it suggests whether contacting him or her might be a good idea.

None of these actions are anything that a competent professional couldn’t handle. All sales and marketing professionals know how to research companies for fit, write an email, or send content to a prospect. But instead of waiting for a rep to say, “Hmm … I haven’t spoken to TechCorp in a while, maybe I should send them an email,” Einstein already knows when you should reach out to TechCorp. Instead of waiting for a lower-level account rep to surface the change in the decision-maker for an account, a sales executive sees it the second it happens.

Most of these actions can be modified or programmed from what amounts to a decision tree. This again suggests that there is less “thinking” going on and more working through a complex set of rules. And that’s just fine. Computers are much better than people at seeing patterns, and that is what these types of systems do.

The point of this is to demystify AI and machine learning. In this month alone, Salesforce, Oracle, Microsoft, and SAS announced new AI offerings that basically amount to one form or another of AI-as-a-service.

Evaluating the Potential for AI
All of them offer some form of data discovery, enhanced decision-making, and most importantly, automating at least some business processes. Evaluating the potential for AI should be done the same way that you evaluate any business technology. Determine the pain points you want to address and find the product that addresses those problems for the best price.

The only thing you might want to consider differently is the growth and pace of AI improvement. As it was already pointed out, AI is so ubiquitous that many things that qualify as AI are not even called AI. As companies innovate with AI, they are baking these improvements directly into their platforms. In other words, with each release, the systems are likely to get smarter. So keep that in mind when selecting a vendor. Because AI requires big data and substantial computing power, you might want to favor providers with larger, more powerful capabilities.

Otherwise, it is time to stop thinking of AI as magic or as a technology that is beyond the reach for most companies. Stop treating it like artificial life, and remember that it AI, at its heart, is merely pattern recognition, appropriate for consideration by all companies today.