Based on data collected by our research partner, Metrics Based Assessments, Figure 1 shows the range of expected spending per OS instance for Windows, Unix, and Linux servers. Costs shown include the following:

Based on these definitions, Windows has the lowest annual cost per system instance at $20,700. The average cost of a Linux instance is somewhat higher at $26,100. Unix has the highest average annual cost of operation at $64,800. The highest and lowest costs reported for each platform are also shown in Figure 1.

The metrics shown in Figure 1 provide a range of costs for each operating system that may be used to provide a rough benchmark for comparing an organization’s cost per server instance to the economic experiences of other organizations for that platform. 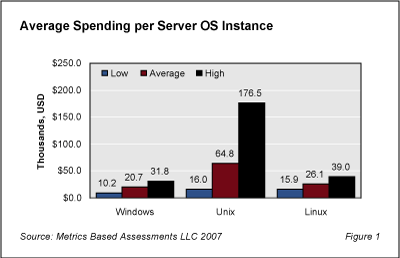 It is tempting to conclude from Figure 1 that Windows is the low-cost operating system, followed closely by Linux, and that Unix is more than double the cost of either operating system. However, this conclusion is not warranted. The main factor behind the differences in cost is the type of applications that execute on each platform. For example, among the survey participants, 20% of the Windows server instances are running e-mail, collaboration, file serving, and print services. These applications are not very support-intensive. On the other hand, approximately 30% of the Unix server instances are running high-end business applications, such as ERP or CRM systems, which require a higher level of system administrator support. Among the Linux OS instances, 27% are running such applications.

Total cost of ownership (TCO) calculations between Windows, Linux, and Unix are a hotly-debated subject. Each operating system has its advantages and disadvantages. A fair comparison between them can only be made in terms of a specific workload in a particular organization.

Statistics in this article were provided by Mark Levin, a Partner at Metrics Based Assessments, LLC, from data collected from data center benchmarking studies conducted over the past 12 months. The full set of metrics is available in his book, Best Practices and Benchmarks in the Data Center.