Companies are collecting more data and connecting more applications than ever, and they must ensure that data is secure, reliable, and accessible. But despite these increased demands, companies appear to be restraining the growth in their database administration staff. Many factors are keeping a lid on this IT staff function, including outsourcing, easier-to-administer databases, and job segmentation. 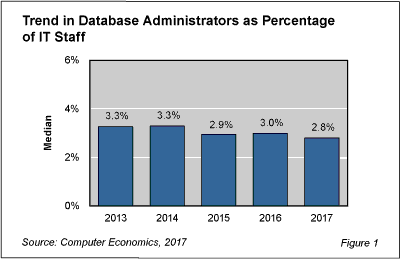 The 2.8% percentage would seem to contradict what is going on with databases. For instance, the explosion in mobile devices and the Internet of Things (IoT), both of which produce massive amounts of data, lead to greater need for data collection and analysis. And each of these sources of new data provides a very different challenge. The sensors and “smart” devices that are part of IoT may produce structured data, but in massive quantities. Mobile devices produce both structured and unstructured data, such as geolocation data, that organizations may wish to capture. As such, personnel with DBA skill sets may find themselves in greater demand for alternative big data positions as the need to capture and mine such data increases.

“Another factor keeping a rein on DBAs is the rise in software as a service,” said Tom Dunlap, director of research for Irvine, Calif.-based Computer Economics. “You don’t need to host or run the database when you use a SaaS provider. That eliminates a lot of work for the DBA staff. When you combine SaaS with the DBA function segmenting into roles like data warehousing and performance tuning, I foresee a slow decline in pure DBA work.”

IT executives have an ongoing need to evaluate the adequacy of their database administration staffing in the face of demands for more accessible, more flexible, and more secure data. The full report helps executives determine whether they are keeping pace with industry standards by providing four benchmarks: DBAs as a percentage of the IT staff, DBAs as a percentage of the Data Center Group, users per DBA, and business applications per DBA. We present benchmarks for small, midsize, and large organizations. We also examine the influence of sector on these benchmarks as well as the multiyear trend in DBA staffing. The ratios in this report are based on our annual survey of more than 200 IT organizations.

This Research Byte is based on our report on this subject, Database Administration Staffing Ratios. The full report is available at no charge for Computer Economics clients, or it may be purchased by non-clients directly from our website (click for pricing).