During the late 1990s the median IT organization in North America experienced double-digit IT operational budget growth. Even as recently as 2006 to 2008, IT budgets were growing in the 4% to 5% range. But today, IT budgets are growing only 2% at the median and the outlook for 2012 is unchanged.

While IT budget increases are limited, the requests for new IT initiatives are increasing. And unless corrective action is taken, these pressures can lead to a downward spiral in the role of the CIO, as illustrated in our report, Elevating the Role of the CIO. 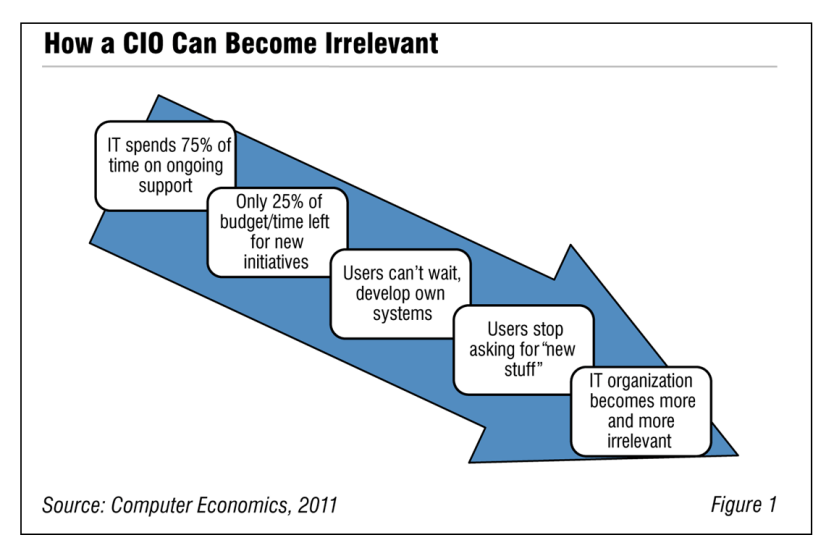 IT budgets in most organizations are heavily weighted toward ongoing support. At the median, only 25% of the typical IT budget is available for new initiatives, allowing the CIO to satisfy only a few high-priority projects. This leaves some important requests unsatisfied, and business leaders take it upon themselves to source or build their own solutions. Eventually, the CIO and the IT organization become less and less relevant to the success of the business.

In such organizations, the CIO slowly comes to be viewed as a caretaker, only maintaining and making small changes to legacy systems, and not as someone who is at the center of the action.

How can the CIO avoid irrelevance and elevate his or her role in the success of the business? In a nutshell, the CIO must optimize the IT infrastructure and lower ongoing support costs so that IT budget and staff time can be focused on more value-added activities. This strategy can be summarized in five major phases as described in the full report.

This Research Byte is a brief overview of our report on this subject, Elevating the Role of the CIO. The full report is available at no charge for Avasant Research subscribers, or it may be purchased by non-subscribers directly from our website (click for pricing).