The Computer Economics 2015 IT Salary Report anticipates wages for typical IT workers will rise about 3.0% in the coming year, an increase that while modest by historical standards should yield real wage growth in the low-inflation environment.

Figure 1 from the study shows that even at the 25th percentile, organizations are planning to give their IT workers a 2.0% pay bump, indicating most organizations are feeling some pressure to increase pay rates as the jobs market improves and as the recovery broadens its base. 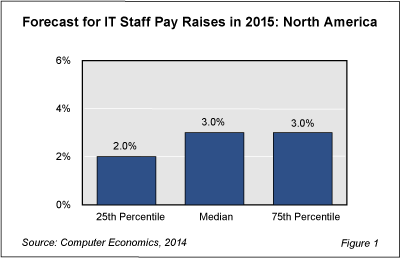 This forecast assumes the economy and the ability to raise prices will improve in the year ahead. But it will not require much improvement. The forecast calls for compensation increases at a similar pace as the previous year. In 2014, the U.S. Labor Department’s Bureau of Labor Statistics reported that total cost of employment for all civilian workers rose 2.2% for the 12 months ended in September. That was slightly ahead of a 1.7% rise in the Consumer Price Index for the 12 months ended October.

The full report estimates 2015 wages for 69 IT job functions for more than 400 U.S. metropolitan areas. We publish salary table in Excel format. The report is based on a study that draws information from our annual salary survey of  IT organizations in the U.S., our IT spending outlook survey for 2015, our annual IT Spending and Staffing Benchmarks study, and the U.S. Department of Labor’s Bureau of Labor Statistics compensation data. That data, which draws upon a sample of about 1 million state unemployment insurance records, enables us to extrapolate from our estimated national median wages for specific job functions to compensation for those same functions in various cities, counties, and regions around the country.

This Research Byte is a brief overview of our study, The Computer Economics IT Salary Report 2015. The full report is available at no charge for Computer Economics client or may be purchased directly from our website (click for pricing).