Wage increases for IT jobs in recent years have been modest, but 2018 looks to be slightly better. Some signs indicate that the job market is quickening a bit, and wage pressures will continue to build. However, companies are choosing to not grow IT budgets as quickly as the economy suggests they would.

Overall, the Computer Economics IT Salary Report 2018 anticipates that IT workers at the median will receive a pay raise in the neighborhood of 3.0%, as shown in Figure 1 from the full report. This represents a slight uptick from the 2.8% we projected in 2017. While 3.0% is modest, it does represent a growth in real wages, as inflation remains around 2.0%. 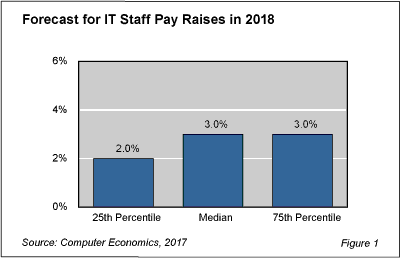 Although there are always exceptions for hard-to-find skills, IT organizations are not adding greatly to overall headcounts, which is keeping a lid on salary increases. About 45% of all U.S. IT organizations plan to increase their IT staff levels in 2018. This is higher than the 40% projected for both 2016 and 2017. Nevertheless, fewer than half of IT organizations are increasing their headcount this year, which may explain why we are seeing only modest increases in IT wages.

“Companies have held off hiring for several years, likely due to some lingering economic uncertainty,” said Tom Dunlap, director of research for Computer Economics, based in Irvine, Calif. “The study shows that if they had the budgets IT leaders would be hiring, with more than 60% saying they’d do so if budget allowed. If the economy continues to grow, and unemployment remains low, the next few years could show stronger growth. Until then, it looks like another year of modest wage increases for tech workers.”

Although IT staffing levels are not growing strongly, at least we do not see widespread layoffs on the horizon. Only 6% of respondents are reducing IT headcount. But almost half are simply holding headcount steady.

For the first time, the study also examines larger trends in hiring, including whether an IT talent gap exists. It also examines which IT jobs are the toughest to fill.

The full report estimates 2018 wages for 75 IT job functions for more than 400 U.S. metropolitan areas. We publish salary table in Excel format. The report is based on a study that draws information from our annual salary survey of more than 100 IT organizations in the U.S., our IT spending outlook survey for 2018, our annual IT Spending and Staffing Benchmarks study, and the BLS’s compensation data. That data, which draws upon a sample of about 1 million state unemployment insurance records, enables us to extrapolate from our estimated national median wages for specific job functions to compensation for those same functions in various cities, counties, and regions around the country.