Although large IT organizations are continuing to embrace the Information Technology Infrastructure Library (ITIL), the number of organizations committed to full ITIL implementation remains relatively small. However, when practiced correctly, ITIL should have a deep impact on an IT organization’s core processes.

So then why do so many companies neglect ITIL? Some critics find the guidelines too prescriptive and inflexible. Barriers to adoption include lengthy implementations, disruption of current processes, high up-front training costs, and relatively slow return on investment.

As shown in Figure 3 from the full report, ITIL Adoption and Best Practices, a fair number of organizations show no interest in ITIL, with 33% reporting no activity. Furthermore, only 8% practice it formally and consistently. 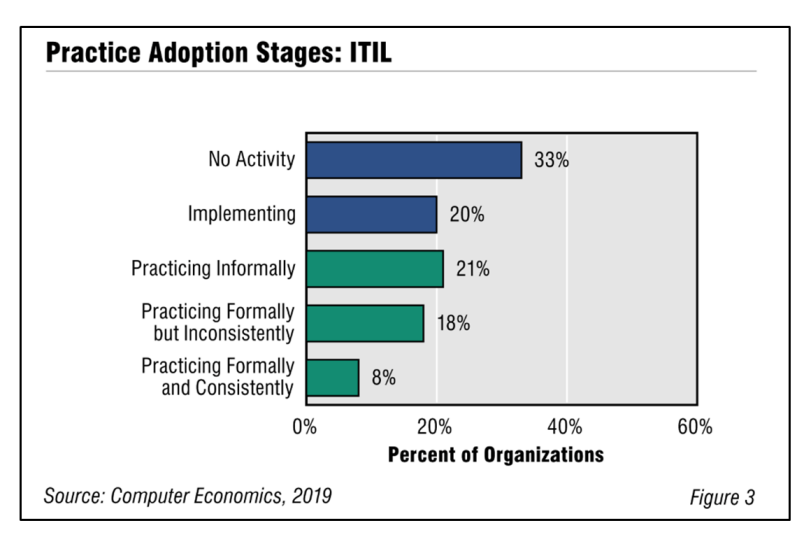 ITIL can be complex and expensive to implement,” said Tom Dunlap, director of research for Computer Economics, an IT analyst firm based in Irvine, Calif. “But the positive benefits it can bring in such service areas as change management and incident management are substantial. In the face of the growing popularity of DevOps, ITIL could gain a second wind by incorporating it into its framework.”

Despite the overall mediocre adoption rate, ITIL has been implemented by thousands of organizations worldwide, especially in the U.K., Australia, and Europe, and it continues to remain relevant. In our full report, we show that ITIL is more popular in some industry sectors, with the financial services sector at the top.

This is all well and good, but how many IT organizations are truly ready to implement such a complete, internal framework, especially for areas where performance is already at an acceptable level? This is the core dilemma of ITIL.

Another factor is that while ITIL is often put in place for IT service management, application development groups are less willing to embrace ITIL. These days, DevOps is taking root as a faster and more flexible approach to change management. DevOps is an organizational model and process with a high degree of automation to promote collaboration between software developers and IT operations with the goal of supporting more frequent deployment of software changes. On the other hand, ITIL imposes discipline on the change process with the goal of avoiding service disruptions. As a result, some observers and practitioners see them as conflicting philosophies.

The full report begins with a brief explanation of ITIL’s history and current framework for IT service management. We next study ITIL adoption and practice levels, examining those by organization size and sector. We conclude with best-practice suggestions for successful ITIL implementations, and how to bring about a bimodal framework that embraces both ITIL and DevOps.

This Research Byte is based on our report on this subject, ITIL Adoption and Best Practices. The full report is available at no charge for Avasant Research Subscribers, or it may be purchased by non-subscribers directly from our website (click for pricing).