The importance of computer networks cannot be overstated in this digital age. Yet remarkably, the network support staff as a percentage of the total IT staff appears to be on a slow decline after remaining relatively stable for a few years.

As shown in Figure 1 from our full report, Network Support Staffing Ratios, network support staffing has shown a modest decline as a percentage of the IT staff during a five-year period, dropping from 6.3% in 2012 at the median to 5.5% in 2016. The ratio peaked at 6.7% in 2013 but then declined through 2016. 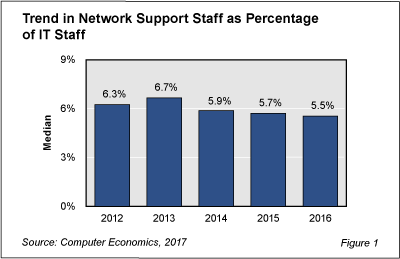 The staff-level fluctuation may reflect changes in other areas of the IT organization, such as the increased hiring of programmers or business analysts. But it also may reflect the positive impact of new technology within networking, including software-defined networking, network virtualization, and automation, which allows staff to monitor larger portions of the network.

“Networks are more vital than ever, but the increasing need for bandwidth, security, analytics, etc., has not driven up the ratio of network support staff in the typical IT organization,” said Tom Dunlap, research director at Computer Economics, an IT analyst firm based in Irvine., Calif. “Rather, as with other infrastructure support functions, the data suggests that innovations like virtualization and automation are enabling IT organizations to do more with less.”

This Research Byte is a brief overview of our report on this subject, Network Support Staffing Ratios. The full report is available at no charge for Computer Economics clients, or it may be purchased by non-clients directly from our website (click for pricing).