According to the latest study conducted by Computer Economics, mainframe acquisitions are on the decline in every industry sector. Our 2003 Information System Spending study, which benchmarks numerous IT spending and budget trends across every major industry sector, revealed that this trend will continue for the next several years.

As shown in Figure 1, only 7% of all companies in the annual study reported that they have definite mainframe acquisition plans for 2003. Another 5% are still undecided as yet. However, the overwhelming majority (88%) have no plans to add mainframe capacity this year. 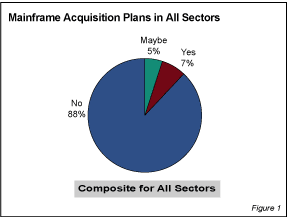 Computer Economics projects that by 2006 approximately 5% of all organizations will be forecasting annual mainframe acquisitions; this includes new systems and/or increasing capacity on existing systems. However, this still represents a sizeable market for mainframe systems. It is likely that this trend will level out at that time, providing IBM and other big iron manufacturers with a smaller but solid market.

The 2003 Information System Spending study is now available. This important tool has assisted hundreds of senior IT managers in making critical budget and technology forecasting decisions for almost 15 years. To order your copy, contact Computer Economics at 1-800-326-8100, ext. 123.