The latest metrics provided by our business partner Metrics Based Assessments LLC (MBA) shows these economic incentives continue to motivate IT organizations to increase their virtualization rates. At present, 95% of data centers are deploying some level of server virtualization, and the rate of virtualization continues to increase year by year. 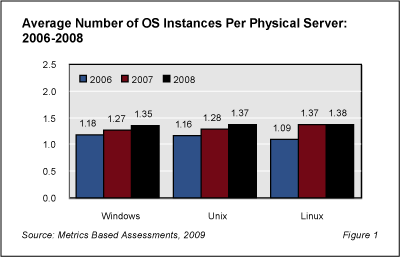 On individual servers, the number of OS copies can be even higher. Some benchmarking participants report successfully executing 10+ OS instances per physical machine. 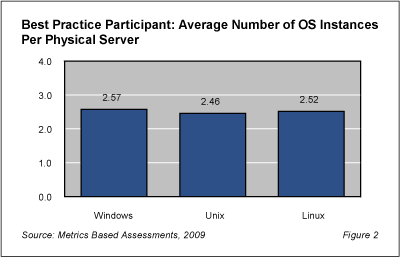 These findings show that server virtualization has become the norm across all sizes and types of data centers. When viewed across the entire data center, the overall level of virtualization appears to be low–about 1.4 instances per server. But the rate has slowly and steadily increased over the past three years, and best practice organizations are achieving twice this level. In these times of economic recession, server virtualization remains a major strategy for cutting costs and improving resource utilization in the data center.

A complete set of data center benchmarks are available in Mark Levin’s book, Best Practices and Benchmarks in the Data Center.