Home » Product » Service Providers Get Bigger Share of IT Budget

IT organizations are shifting more of the IT spending to outsourcing services as they grapple with staff reductions and budget cuts amid the economic downturn. 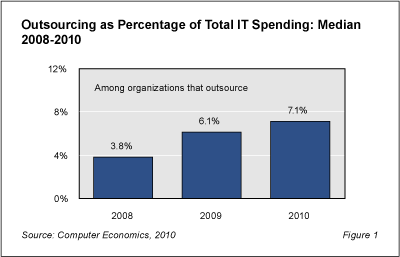 During this period, many organizations put capital projects on hold, cut operating expenses, and laid off workers. As such, the rise in outsourcing expenses as a percentage of total IT spending is partly a result of a decline in total IT spending. The net result, however, is that IT organizations are outsourcing a greater portion of their IT functions today than just a few years ago.

Outsourcing service providers, like many IT vendors, suffered during the recent recession as businesses reduced IT capital and operational spending. Organizations that were using outsourcing to fill in around the edges cut outsourcing services out of their budgets in favor of retaining in-house staff. Other IT organizations, however, increased the amount of work they were giving to service providers as they downsized their internal staffing levels.

This Research Byte is a brief overview of our report on this subject, IT Outsourcing Statistics 2010-2011. The full report is available at no charge for Computer Economics clients, or it may be purchased by non-clients directly from our website (click for pricing).