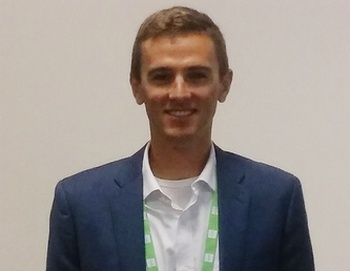 One such customer is Babbitt Chainwheels of New Bedford, Mass. Founded 110 years ago with an old-sounding name (Babbitt Steam Specialty Co.), the firm is living proof that new technologies are not just for new companies. Babbitt’s products may be old, but they are still important for many modern factories. The firm makes “chainwheels,” which are manually operated overhead valve actuators that allow factory workers to open or close valves in high, normally out-of-reach locations.

VP of Operations Ike Babbitt, seen in the above photo, described how his small, family-run company transitioned from a 20-plus-year-old, on-premises system (which included an Infor ERP component) to Infor’s CloudSuite Distribution. In fact, Babbitt is the first Infor customer to go live on this CloudSuite product, making Babbitt a trail blazer for Infor. All previous versions of SX.e (as it was formerly known) were on-premises, said Eric Ryerson, VP of software development for Infor. Infor launched CloudSuite Distribution in 2016.

Caring for the People-Side of Change
Babbitt has two divisions, one that does light manufacturing and assembly of valve accessories, and another that is an importer/distributor of fasteners. The company has 30 full-time employees, a network of sales reps, and seven warehouses. Their former system was Infor’s DMAS system running on an IBM Series i platform (formerly known as AS/400).

Before deciding to make the move to the cloud, Babbitt said the company embraced a change-management strategy and conducted some organizational tests. “Before we did an ERP change I wanted to do a bunch of smaller changes and see how our institution dealt with those changes,” he said.

The smaller changes included some bread-and-butter items: changing everyone over from getting their paycheck every Thursday to direct deposit and going online to see their pay stubs, upgrading the email service to Gmail, and implementing cloud-based calendars. This approach allowed the company to see the pain points early, to see who would help with the change and who would resist. With an old company like Babbitt, it can be difficult to get employees to embrace change, Babbitt said.

“When I stepped in, it was kind of like, ‘what’s he going to make us do that’s different?’ So I think starting with these smaller changes for employees that are used to coming to work and doing the same tasks every day—that was the biggest hurdle, getting them used to doing different things. And whether it’s a big change or a small change, it’s a good thing to start doing them before you jump in with both feet and do something where everything is going to be different.”

A Sense of Urgency
Besides wanting a simplified user interface (UI) and the benefits of the cloud, Babbitt had another reason to want the change: The company’s IT manager was retiring.

“Finding someone to become an administrator for [an] AS/400 is not exactly the easiest thing to do. Or does it even make sense from a business perspective? Probably not. So that was our deciding moment. We knew we had to do something before then, but this was going to force our hand, and we actually have to make a move. We started to plan the rest of the process around her retirement date.”

DMAS is an Infor system (one of many the company acquired), so Babbitt was already getting support from Infor, and that made the ERP decision process easier, he said. The key factors for him were, (1) adopting a cloud-based ERP system with no hardware on site, (2) having a friendly UI that required minimal training for employees, and (3) using consultants that were going to be there before, during, and after go-live.

The UI was a particular focus for the 28-year-old. “When I first went to work, I’d never seen a green-screen system—well, I’d seen it, but I hadn’t actually used a green-screen system before. The training process for me to actually go and learn how to do order entry or anything on an AS/400 was a little bit difficult.”

The company broke the implementation into two projects, data conversion and training. The data conversion was more of an Excel dump, reformat, and re-upload, he said, with one person dumping files and two people figuring out how to line up the fields and where they should go.

Early on, Babbitt came up against a common problem in the data-conversion step. “Once we started looking at the data dumps we realized that our data was not as clean as we had hoped it was going to be. Cleaning it in the old system before you start dumping it is going to be easier.”

From there they provisioned a test system. The tests were to make sure they could put orders through, that accounts receivable/accounts payable were up to snuff, that customers came across correctly to the new system, and their inventory lined up.

Lessons Learned
As for the lessons learned going through the process, Babbitt said: “The change management component often takes a back seat to the critical business function, and I think it’s really important to not let that slip by when things start to get busy with data conversion and training. If there are changes with the way your data’s going to look, make sure everyone knows what those changes are going to look like. You don’t want any surprises when you first go live.”

Two other takeaways for Babbitt involved a long-term plan and business process improvement.

“One thing that we did not have before we started this project was a long-term IT strategy, to figure out where our company was going to go and what the goals were. And [we need to] come up with a road map for how we actually get there.

Another thing that I didn’t realize when we first started this was how much we were going to look at our business processes, and how much we were going to actually change the way that we did some of our business functions. When you’re going live, you may think that you know a lot about the different business functions, who does what, and how they do them. But you don’t know everything until you actually do it differently. We found a lot of efficiency there. So when you’re going live, don’t try to say, ‘how’s the software going to do the same thing that we did before.’ Look at it as, how we can make our business process better?”

Another big benefit with CloudSuite Distribution has been the amount of information Babbitt could get on how his employees worked.

“I thought I knew what everyone was doing and how they were doing it, but now I can actually walk over to their desk, and I know exactly how they are entering that order. Are they doing a 100-line-item order by Excel upload or not? You can look at that sort of stuff to see how they’re doing their job and that they’re efficient with it.”

The conversion took about six months and has been a success, he said. The process has taught him that companies should stick to their core competencies.

“We’re good at what we do, in terms of manufacturing and distribution. We’re not particularly good at the IT side of things. So having someone to help us with the hardware maintenance and all of the stuff that we’re just not adequately trained for—and even if we did hire someone that was adequately trained, keeping them up to speed is time consuming—and frankly we don’t have enough to do for that particular IT person. This [ERP conversion] is allowing us to put the focus more on the business than on the IT side of things.”

Babbitt Chainwheels was founded in 1907. If this experience demonstrates anything, it’s that even small manufacturing/distribution companies who are long in the tooth can reap business benefits and boost employee efficiency by thoughtfully transitioning their on-premises ERP system to a cloud solution. But such companies need to heed Ike Babbitt’s advice. Focus on improving business processes, not just automating the old ways of doing things. Pay attention to the people-side of change so that every employee embraces the new system and the organization is renewed for the next century.