Developing the appropriate level of IT spending for an organization is an important element of IT strategy. On the one hand, IT executives seek to increase IT spending in order to better serve users. On the other hand, the IT function is no different from any other–it must accomplish its mission within the budgetary constraints of the organization. Inevitably, executives seek guidance in the form of benchmarks based on the experiences of other organizations’ IT spending.

However, in studying IT spending benchmarks, it is easy to miss long-term trends. Just as day-to-day fluctuations in the weather can mask long-term climate changes, so can natural variations in IT budgets and corporate performance from year to year mask the long-term economic forces that drive the overall level of IT spending.

This Research Byte is an executive summary of our full report, Ten-Year Trends in IT Spending and Outlook for 2007.

Overall Economic Trends
IT spending is strongly affected by overall economic conditions. In times of economic prosperity, organizations are more likely to loosen the purse strings and make new investments in information technology. Conversely, in times of economic recession or uncertainty, organizations tend to pull back on new development and look to cut IT budgets. Therefore, in order to understand IT spending trends, one must understand the overall economic conditions in which IT budgets are planned.

Figure 1 shows the annual change in the U.S. GDP over the past decade, based on statistics from the U.S. Bureau of Economic Analysis (BEA). At the end of the 1990s, the economy was booming, with economic growth above 4%–well above its long-term average growth rate of 3% since 1990. In 2001, however, the U.S. economy entered into recession, with economic growth under 1%. Since then, the economy has recovered, reaching nearly 4% in annual growth in 2004 and tapering to 3.2% in 2005.
Based on the first three quarters of 2006, we project U.S. GDP growth for 2006 will be 3.4%, which is well above the economy’s long-term average. We expect strong economic growth to continue through 2007. 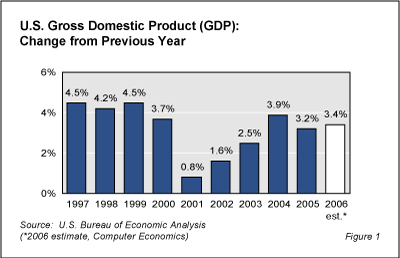 The full version of this report examines long-term IT spending trends over the past 10 years, combining U.S. economic statistics with proprietary survey data collected by Computer Economics. We analyze the long-term trends for several statistics that measure overall economic conditions, IT investment levels, and organizational IT spending:

Summarizing the Results
Economic conditions continue to be strong going into 2007, with few if any indications of economic recession in the near future. The over-investment in information technology during the late 1990s is now behind us and organizations have reverted to normal equipment upgrade cycles and funding for new development appropriate in a growth environment. Although IT vendors of products and services may long for the heyday of IT spending in the late 1990s, we suspect that IT executives in end-user organizations prefer the more measured growth in IT spending that today’s economic conditions allow.

Of course, particular industry sectors and individual organizations face economic conditions contrary to the general trend. For example, home builders going into 2007 face difficult economic times as construction rates have fallen from the boom times of the early part of this decade. But for most organizations, 2007 looks to be a continuation of the measured growth in IT spending that we have seen in the previous two years.

In many respects, IT cost management has matured over the past decade, with IT investments no longer being treated as a special category as they were in many companies during the Y2K and Internet boom. In most organizations, IT spending today is subject to the same constraints of economic conditions and cost justification as spending for any other function. Organizations expect IT executives to become more effective and productive within measured increases in IT spending levels. Headcount increases are particularly scrutinized, leading to increased use of temps, contractors, and outsourcing, which can be cut back more quickly than full-time employee counts. To meet the challenge of delivering IT services within such spending and staffing constraints, IT executives look for ways to reduce the cost and staffing needed to maintain existing systems, freeing up much-needed resources for new development.

This executive summary is a brief overview of our report on this subject, Ten-Year Trends in IT Spending and Outlook for 2007. The full report is available at no charge for Computer Economics clients, or it may be purchased by non-clients directly from our website at https://avasant.com/report/ten-year-trends-in-it-spending-and-outlook-for-2007/ (click for pricing).