Home » Product » Trend Toward Offshore Outsourcing Not Yet Peaked

Trend Toward Offshore Outsourcing Not Yet Peaked

A recent survey of visitors to the Computer Economics website asked respondents regarding the offshore outsourcing plans of their organizations. For IS professionals hoping for a reversal of the trend toward offshoring, the results aren’t good.

Because survey respondents were self-selected and no demographic information was gathered, Computer Economics recommends that readers not place great significance on the exact percentages in the survey. Nevertheless, the results are intriguing and suggestive of some broad trends in offshore outsourcing.

The survey asked a simple question: “Is your organization outsourcing any IT functions to offshore providers?” Respondents were given four choices:

The results are shown in the figure below. 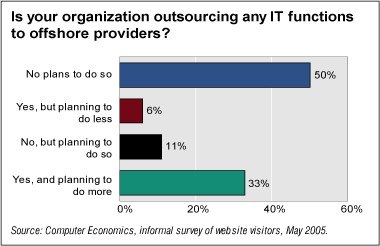 At first glance, it may appear that there is a trend against offshoring, since half of the respondents indicate that their organizations have no plans to use offshore providers. But a more realistic view is to consider that those organizations with no plans for offshoring are “neutral”–they are simply not in the game, at least for now.

Looking at those respondents that are â€œin the game,â€ 33% are already offshoring and are planning to do more. Another 11% are not offshoring today but are planning to do so. Only 6% can be considered as “back-sourcers”â€”taking work back from offshore providers. Looking at these statistics together, 39% of our respondents are maintaining or increasing the use of offshore providers, whereas only 6% are planning to decrease use. If there is a pendulum swing away from offshore outsourcing, it is not taking place among Computer Economics website visitors.

Computer Economics believes that the trend toward offshore outsourcing is still in its early stages. The reason is simple: thatâ€™s where the money is. Personnel-related costs (salaries, taxes, benefits, recruiting, and training) consume the largest percentage of the typical IS budgetâ€”over 30% according to our 2005/2006 IS Spending study.

IS professionals are quick to point out that offshore outsourcing presents new and different problems that can offset the promised cost-savings: the need for additional headcount to manage coordination of offshore personnel, possible lower productivity of offshore resources, the difficulty in communicating and coordinating across multiple time zones, and possible security and intellectual property risks. Nevertheless, based on responses to our survey, executives still feel that the benefits of offshore outsourcing outweigh the risks. It appears that the trend toward the use of offshore providers has yet to peak. 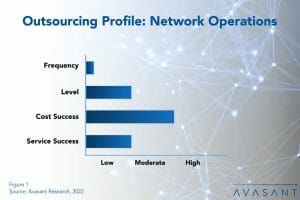 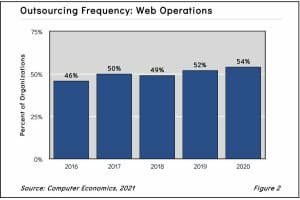 Pandemic Gives Web Operations Outsourcing a Shot in the Arm 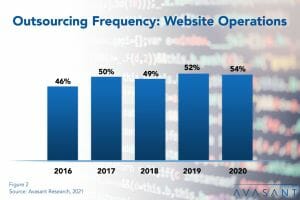 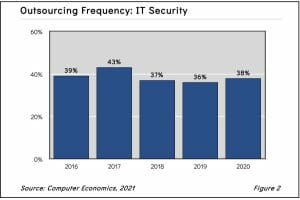