The rollout of Windows Server 2008 offers IT managers an array of new capabilities and the potential to reduce administrative burden and enhance security. We predict that a significant number of data centers will adopt this latest version of Microsoft’s server operating system over the next few years.

This Research Byte is a summary of our full report, Features Will Push Windows Server 2008 Adoption.

Historical evidence indicates that Windows Server 2008 will eventually take over a sizeable portion of the processing load. According to a Computer Economics survey of over 200 CIOs and senior IT managers, previous versions of Windows operating systems are now handling the majority of the load, as shown in Figure 1. The 2008 version of Windows Server is likely to become the primary operating system in the typical data center within three years. 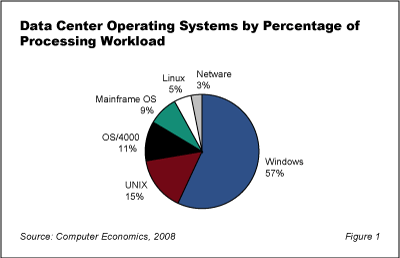 Microsoft has delivered some key improvements with the introduction of its latest server operating system, including improved security, more effective hardware and software management, and the ability to consolidate servers through virtualization. Data centers are likely to proceed on an orderly adoption course for Windows Server 2008 that falls within the range of previous migrations.

This Research Byte is a brief overview of our report on this subject, Features Will Push Windows Server 2008 Adoption. The full report is available at no charge for Computer Economics clients, or it may be purchased by non-clients directly from our website at https://avasant.com/report/features-will-push-windows-server-2008-adoption/ (click for pricing).