Predictions that data center personnel are in danger of long-term decline as cloud computing becomes more commonplace are not yet supported by the historical data, but the four-year trend does show a reversal of fortune for IT workers engaged in supporting servers.

Figure 1 from our study, Server Support Staffing Ratios, shows that systems administrators, systems programmers, and systems engineers declined as an average percentage of the IT staff from 10.2% in 2011 to 9.3% this year. Meanwhile, computer operators, production control personnel, and other operations personnel slipped from 3.2% to 2.8% of the IT staff. 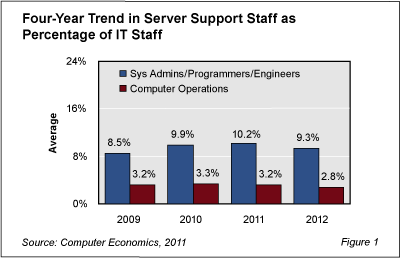 The decline in these data center workers as a percentage of total IT staff, however, may have as much to do with the tepid recovery in IT capital spending as any rise in data center outsourcing. Figure 1 also shows that the staffing ratio for systems administrators and related job functions rose over the course of the recession, the result of suffering fewer cutbacks than areas such as help desk, network support, and application development as funding for project-related work vanished.

As such, the decline could be just a cyclical return to a normal staffing ratio. Over the past decade, systems administrators and related functions have remained at a relatively constant percentage of the IT workforce. In 1997, according to our annual benchmarking study that year, they accounted for about 9% of the IT staff, or about the same as today. If data center personnel in the enterprise are destined to decline as more data center jobs are outsourced, such a decline is not yet supported by the data.

On the other hand, computer operators and production control functions appear to be continuing on a long, slow decline that began with the transition from mainframes to servers, slipping from 3.2% of the IT staff in 2009 to 2.8% in 2012. Over the past decade, computer operations headcount has declined sharply in step with the decline in the use of mainframes and the automation of certain data center functions. This category accounted for about 10% of the IT staff in 1997.