The personnel who comprise the communications system support staff include engineers, analysts, specialists, and administrators who manage email, messaging, telephony, videoconferencing, unified communications, and other communication systems. Our research shows that some systems within the communications function are in the ascendency—the growth of IP telephony is one example. But other applications such as videoconferencing (and its derivative, telepresence) have yet to fully enter the mainstream because they are sophisticated, expensive, and require organizational resources to manage. Another complicating factor in communications systems is the rise of telecommuting. As more workers spend some time working from home, some traditional office communication applications are being used less. However, some companies need to offer new ways for those employees to communicate, requiring changes in the network infrastructure.

Software-as-a-service (SaaS) offerings (sometimes called communications as a service) and the cloud also appear to be affecting this staffing metric. For example, many companies are turning to SaaS providers for email and calendaring applications as well as full-blown unified communications. This lets IT organizations devote more resources and spending to other functions.

As shown in Figure 1 from our full report, Communications System Support Staffing Ratios, support staff as a percentage of the IT staff has been essentially flat, up slightly in 2016 to 2.5% at the median. 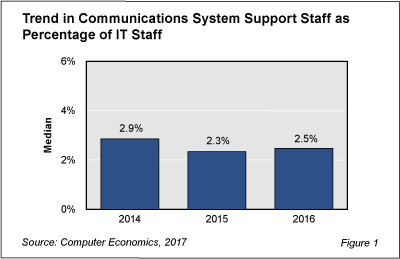 Staffing ratios are also affected by increased demands in other areas. Application development, for example, is taking a larger portion of the IT department staff, which will cause other functions, such as communications support, to remain modest on a percentage basis.

“As we point out, SaaS offerings, as well as the rise in telecommuting, are two factors that are moderating communications support staffing,” said Tom Dunlap, director of research for Computer Economics, based in Irvine, Calif. “I’ve also heard from some IT managers that it can be hard to find qualified candidates to fill these positions. In light of these realities, this staffing category could continue to remain at these modest levels in the coming years.”

This Research Byte is a brief overview of our report on this subject, Communications System Support Staffing Ratios. The full report is available at no charge for Computer Economics clients, or it may be purchased by non-clients directly from our website (click for pricing).