IT operational budgets in 2015 are up 5.5% at median in the financial services sector, a rise that gives this sector the distinction of having the fastest growth rate of any industry surveyed in the annual Computer Economics IT Spending and Staffing Benchmarks study.

The IT spending growth in this sector is also broad-based. About three-quarters of the banks, insurers, and other financial service firms plan to increase IT operational spending this year, compared to only 8% that are cutting budgets, the study found.

IT capital budgets in the financial services sector, however, remain stubbornly flat year-over-year, despite the acceleration in IT operational spending growth. This is true of most other sectors as well. “At least some of that new spending is on cloud applications and infrastructure, and we think that explains the disparity between IT operational and IT capital spending growth,” said John Longwell, vice president of research for Computer Economics, an Irvine, Calif.-based research firm. “Capital spending remains weak across the board, but companies are increasing operational budgets at a recovery pace.”

Other sectors with above-average IT spending growth include retail/wholesale distribution and healthcare services, both of which have IT operational budgets that are rising 5.0% at the median, as shown in Figure 1-8 from the study. The executive summary, which includes this and other key findings, is available for download at no charge from the Computer Economics website. 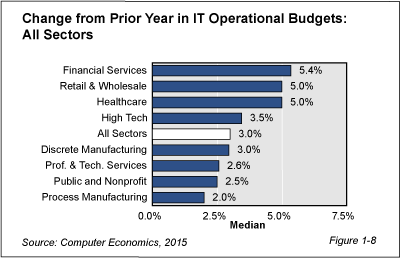 Financial services is one of the most IT-intensive sectors in the economy, with the higher percentage of  revenue going to IT than most other industries, and consolidation and technology adoption is helping drive IT spending. Healthcare services, meanwhile, are continuing to modernize information systems while grappling with changes in the U.S. brought about by the Affordable Care Act, and retailers and wholesale distributors are benefiting from strength in consumer spending.

Other sectors fall closer to the composite median for all organizations, which at 3.0% is the highest growth rate since the end of the recession. Process manufacturing remains a laggard, reporting only a 2.0% rise in IT operational spending. The sector even lags behind public and nonprofit organizations as a rising dollar constrains revenue.

The Computer Economics IT Spending and Staffing Benchmarks 2015/2016 study is based on a detailed survey of more than 200 IT executives in the U.S. and Canada on their IT spending and staffing plans for 2015/2016. It provides IT spending and staffing benchmarks for small, midsize, and large organizations and for 23 sectors and subsectors. A description of the study’s metrics, design, demographics, and methodology can be found in the executive summary along with the key findings.

This Research Byte is a brief overview of the findings in our report, IT Spending and Staffing Benchmarks 2015/2016. The full report is available at no charge for Computer Economics clients, or it may be purchased by non-clients directly from our website (click for pricing).