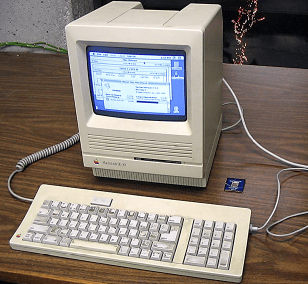 A lot can change in three decades. Thirty years ago, personal computers looked like this Macintosh SE30 (pictured right), released in 1989. Boxy. Small screens. Poor resolution. Not particularly useful for most enterprise applications. That same year, though, Intel would release the 486DX processor. Couple that with new software such as Microsoft Office (also released in 1989), and personal computers would revolutionize productivity for every worker in nearly every role.

Also in 1989, Sir Tim Berners-Lee invented the World Wide Web, which would soon begin to transform the way business was done (especially shopping). With the introduction of Windows NT in 1993, low-cost servers would soon enter the data center in large quantities, shifting workloads away from mainframes and even minicomputers. The networked business would soon lead to some of the big headaches of our time—first, inboxes full of email and telecommuting eroding the work-life balance, and later with social media trolls, aching thumbs and sore eyes from overuse of our mobile devices, and even cybercrime. Ultimately, virtualization would lead to the next revolution—the cloud. All of this in 30 years. There were only two constants in all of that time. The first was change. The second was the Computer Economics IT Spending and Staffing Benchmarks study.

That study provides a unique view of the changes that have occurred in IT organizations through the last three decades. But in this, our 30th survey, we also thought it would be interesting to get the view of our survey takers on what technologies and practices they perceive as having the greatest impact on enterprise IT since we began our study.

As an optional bonus question at the end of the survey this year, we asked respondents to pick three items from a list of 12 that they thought had the greatest impact on enterprise IT. The list included agile development, cybercrime, email, improved power in compute and storage, low-end servers, mobile devices, offshoring, open source, search engines, social networking, telecommuting, and virtualization.

We purposely excluded the internet and the cloud because it seemed rather clear that they would make the top of the list. For similar reasons, we excluded e-commerce. The results are listed in Figure 1. 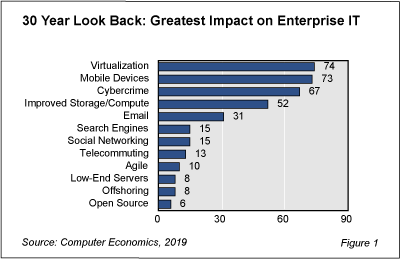 The results reveal a few interesting implications. The first is that virtualization finishing first is likely a result of our not including the cloud on the list. While virtualization technology dates back to IBM’s work in the 1960s, we don’t believe those taking the survey were thinking about mainframe  virtualization. Comments were based squarely on the cloud. A director of IT at a professional services firm voted for virtualization because it allowed the “trend towards hosting in public clouds like Azure and AWS [that] have greatly improved flexibility, features, and failover/disaster recovery.” An IT services manager at a manufacturing company voted for virtualization, because “virtualization has revolutionized how IT provides services to the business and was key to the birth of many cloud services used today.”

Mobile devices are a close second on our list, although it consistently lags behind  virtualization as respondents’ top choice. Nevertheless, the impact of mobile devices is still in the early stage in terms of the extent to which they are impacting enterprise IT. They seem to be a double-edged sword for IT. A director of IT put mobile devices on his list because it extended the reach of IT, as he put it, “from a small closet to the whole world.” But not everyone seems happy with the new responsibilities. Some impacts of mobile, as we see, can be negative. A respondent who works for a city government commented: “Mobility has empowered the users to think outside of IT. It has changed the user/IT relationship and made the job of managing the environment much more difficult where governance is one of the most important aspects of managing IT.”

Rounding out the top tier and placing third is something on the negative side: cybercrime. There never seems to be an end to high-profile data leaks, ransomware, and privacy violations. There were certainly security incidents in enterprise IT prior to 1990, and we were tracking IT security spending in our first survey 30 years ago. But the number and severity of these attacked increased enormously when commercialization of the internet put nearly all businesses online and opened them to cyberattacks. The impact of cybercrime on enterprise IT has been enormous. One director of IT at a professional services firm wrote that “we have to spend a considerable amount of resources on security and compliance.  It’s now a cost of doing business in our industry.”

Not far behind the top three come improved storage and compute power and email. Improved storage and compute power particularly drew a lot of interest. Powered by Moore’s law, the constant improvement of computing power and storage has permitted workers to do things at their desk that would have once taken whole teams to accomplish working on mainframes. Improvements in storage have enabled big data analytics and business intelligence that have empowered real-time management decisions where once executives had to wait for weekly or monthly batch reports, or rely on mere instinct. 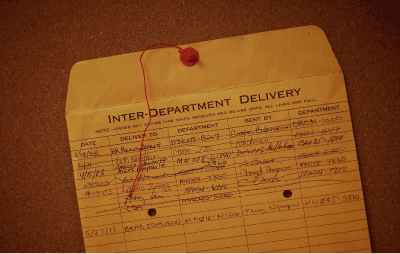 Email rounds out the top five. There is no doubt that email has had a great impact on the way we communicate within organizations and with customers, suppliers, partners, and the general public. As an IT manager at a construction and trade services company commented, “Email is a pillar of communication today, and companies now cannot survive without email services.” Many young people found their first job in corporate America by spending their days delivering these little yellow babies (pictured right).

But it isn’t just shrinking the mail room. Email has allowed organizations to conduct international business 24/7. It has allowed small, local businesses to compete for work internationally without having to break the budget on travel, and it has changed the way we work for better and for worse. Most people reading this will know what it is like to arrive in the morning and spend most of their first work hours trying to empty the inbox.

Search engines and social networking tie for the next place in our survey. Both have undoubtedly had giant impacts on society, but it seems our survey group thinks their impacts are larger in the consumer world than the enterprise. An IT manager at a professional services firm confirmed this when he chose not to vote for search engines at all but commented, “I would say that search engines have a huge impact on society at large, but I would have to say email would be the biggest to enterprise IT in that time.”

For all of the media buzz around Twitter, Facebook, LinkedIn, and other social media companies, our survey respondents do not judge social networking to have had a major impact on enterprise IT. Perhaps the impact has been greater on society in general than in business. It only appears as No. 7 on our list.

Similarly, the impact of telecommuting is not highly ranked, perhaps because it impacts the lives of workers more than the enterprise. It ranks eighth in our survey.

Agile development, which comes in at No. 9, is not really a technology, but set of practices. Interestingly, our survey respondents are divided into two camps: They either thought agile was incredibly important or not important at all. While agile only received a few votes, all of them were first or second on the list of the people who voted for them. This most likely reflects the types of organizations or roles of those respondents.

On the flip side, three technologies didn’t attract many votes at all. Low-end servers tied with offshoring at second to last. Of those who voted for low-end servers, most also voted for virtualization, a sign that they valued it as a part of the cloud puzzle.

The low impact of offshoring may be partially due to how we worded the question. An IT manager for a manufacturing firm commented, “I think if ‘offshore outsourcing’ was listed as just ‘outsourcing,’ it would have a bigger impact score. The amount of stuff we can outsource today is huge and dramatically impacts the skills needed to manage IT.” It is a valid point. Typically, we find that most companies that outsource tasks to a vendor do not care if the work is done on shore or off, as long as the work is done correctly. However, the 24/7 nature of IT has absolutely lead to a more international flavor for IT, and it would be unfair not to acknowledge it. 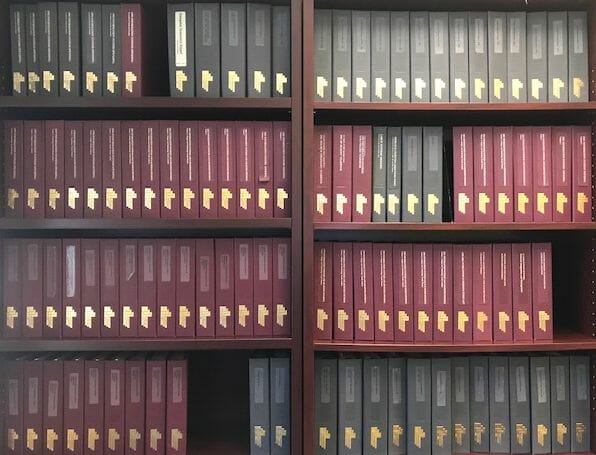 Finally, the least impactful technology in terms of votes received is open-source software. This may be due to the fact that many IT professionals do not fully recognize that most cloud services used in enterprise IT are built largely on open source. Open source has had a great impact, but much of it goes unrecognized. But some recognize the contribution: while only six people chose to include open source in their top three, three of those six put it first.

As we said, 30 years is a long time. A lot has changed since the first IT Spending and Staffing Benchmarks study—including the authors.  The current vice president of research for Computer Economics and lead author of the study was still in high school when the first edition came out in 1990. Another change is that we no longer print or distribute the study in hard copy, although we still keep a copy for the record on bookshelves in our office, as shown in the photo nearby. Moreover, since the publication is now entirely digital, it lends itself to distribution over the internet, and Computer Economics was one of the first research firms to offer website subscriptions. Finally, the detail that we track in our report has evolved as technologies have changed. For example, in 1990 we tracked spending separately for mainframes, minicomputers, and microcomputers—a division that was more meaningful when hardware was a much larger percentage of IT spending. Today, we not only track spending on desktop computers, but we also report metrics on mobile devices, virtual machines, cloud applications, and other devices and technologies that didn’t exist 30 years ago.

But despite all the change, the mission of enterprise IT remains the same—to serve the business. All of these technologies, plus dozens more we kept off the list, continue to do that today. Newer technologies like artificial intelligence and the Internet of Things promise more change. Though the IT Spending and Staffing Benchmarks study itself has grown and adapted to the evolution of IT, it has been a constant through all these years. We expect it to continue to grow and evolve for the next 30 years as well.