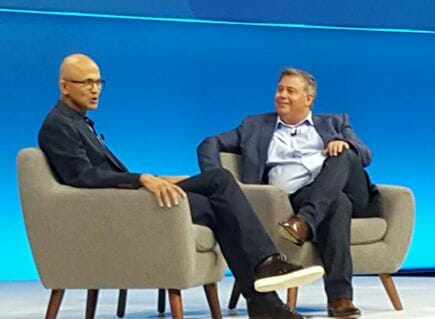 In a move that will cause shockwaves in the CRM world, Salesforce has lost part of one of its most high-profile accounts—the portion of the former Hewlett-Packard called HP Inc.—to archrival Microsoft. HP Inc. has announced that it will replace Salesforce with Microsoft Dynamics CRM Online in a new six-year agreement that will include deployment to thousands of employees across the company.

In addition to Dynamics, HP Inc. has invested in Azure, Office 365, and other Microsoft Cloud solutions. HP Inc. is the smaller portion of the old Hewlett-Packard that deals with personal computers, printers, and the like. HP Enterprise is the much larger portion of the old company, headed by Meg Whitman, that focuses on the more-lucrative corporate hardware and IT services segments.

“We have chosen Microsoft Dynamics as our CRM solution for our direct selling, partners, and services,” said Jon Flaxman, chief operating officer, HP Inc., in a Microsoft press release. “This brings us a cloud-based solution that delivers a more effective and efficient collaboration engine across our business.”

A High-Profile Client for Salesforce
It’s a big win for Microsoft, and it can’t be overstated how big an account the two halves of HP are for Salesforce. It was a huge reference account for the CRM leader. Salesforce even set up a dedicated instance in the Salesforce multi-tenant cloud, running on HP’s Converged Infrastructure, and called it a Salesforce Superpod. The companies jointly developed and marketed the Superpod to large enterprises.

When the Superpod was announced in 2013, Marc Benioff, chairman and CEO of Salesforce, said the partnership was a “breakthrough in cloud computing.” (Benioff is well-known for his hyperbole.)

It has to be particularly jarring for Salesforce that it lost the HP Inc. account to Microsoft. At one point, Microsoft and Salesforce were playing together nicely. Microsoft integrated Salesforce apps into Office 365 and even considered buying the company. But the cooperation between the two was short-lived, and Benioff is singing a different tune now. Earlier this month, he told Wall Street analysts that the competition is back on with Microsoft. In retrospect, he clearly knew at that time that he’d lost the deal with HP Inc.

Rivalry Heats Up
The rivalry between the Redmond software giant and Salesforce has become blisteringly hot lately, which is leading to some very pricey moves (and some rich new employees of the two firms). In June, Microsoft bought LinkedIn for $26.2 billion, the largest acquisition in its history, snatching it out of Benioff’s hands. Salesforce countered with paying a premium (about $750 million in stock, equity, and cash) for a startup called Quip, a productivity app founded by Facebook’s former CTO. Quip’s productivity platform seeks to change the way users collaborate so that they don’t have to rely on email. Quip lets users create and manage documents together with built-in chat capabilities. In other words, Quip has the lofty goal of trying to horn in on the dominant Microsoft Office platform.

The HP Inc. announcement is a huge boost for Microsoft’s CEO Satya Nadella’s integration strategy and will add fresh fuel to the rivalry. In July, Microsoft unveiled an ambitious plan to combine its current CRM and ERP cloud services into an integrated cloud platform that leverages its Office 365 office suite. Called Microsoft Dynamics 365, it is yet another step in Microsoft’s strategy of one seamless experience. Dynamics 365 combines the company’s CRM and ERP cloud solutions into one cloud service with new apps to help manage specific business functions, including: financials, field service, sales, operations, marketing, project service automation, and customer service. By integrating Dynamics, Office 365, Cortana, Power BI, and other services, the idea of standardizing on Microsoft technologies becomes more attractive to customers such as HP Inc.

At the time of this writing, Microsoft has not responded to our request for additional information. We can only surmise that as a separate company, HP Inc. apparently needed to get off the HP Enterprise instance of Salesforce. The company could have also gone with Salesforce, but the need to make a move opened the door to Microsoft.  So, nothing changes with HP Enterprise, but Salesforce loses a portion of a high-profile account.

Salesforce is still the 800-lb gorilla in cloud CRM and still has an enormous share with large companies, along with SAP and Oracle with their cloud CRM offerings. But Microsoft is showing that it also can compete head to head with the big three in the large enterprise space. CRM buyers can only benefit from additional choices.