Interest in IP storage area network (SAN) technology is growing because of its undeniably lower acquisition cost in comparison to traditional Fibre Channel (FC). The big question, however, is whether the ownership costs and performance differences of IP SANs are sufficient to attract customers from the more commonly used FC SAN architecture.

Computer Economics research indicates that many users are, in fact, finding that IP SANs are a more economical and effective solution than FC SANs, and that IP SANs are therefore a viable and desirable alternative. These results are encouraging, but potential users must consider several caveats involved in the TCP/IP approach to SAN technology before taking the plunge.

As noted above, FC SANs rely on the Fibre Channel Protocol (FCP) to support data transfer. In an IP SAN, the upper layer protocol can be either Internet FCP (iFCP) or Internet SCSI (iSCSI). In either case, IP SANs use Ethernet for physical transport and TCP/IP for the networking protocol. The increasing demand for iSCSI storage arrays is apparent from the growth in revenues that we predict for this technology, as shown in Figure 1.  Our projections indicate that between 2005 and 2007, spending is expected to more than double. 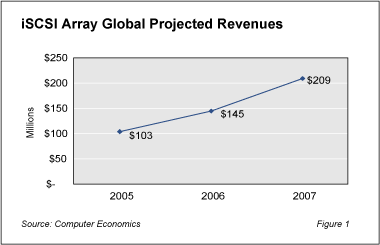 IP SANs Work in the Real World
The practicality of IP SANs can perhaps best be appreciated by a case study of Schenck Business Solutions, a 500 partner accounting firm in Milwaukee. The company was running out of storage space on its FC SAN. In addition, the firm wanted to replace other direct attached storage. In comparing costs, the CIO found that a 1.5TB FC SAN would be $90,000. The cost of an equivalent 2.5TB iSCSI based SAN was just $47,000.

But how well would such a system, with half the cost, perform? The company found that the system operated flawlessly. Moreover, setup and management costs were less than those of the FC SAN. Ownership costs on the new system were lower because Windows server administrators could manage it. Since making the decision to change to an IP SAN, the company has increased the capacity of the system to 7TB of storage in support of 12 servers. Other users of IP SANs report similar returns from networks that are properly configured and operated.

In assessing whether IP SANs are right for your organization be certain to quiz potential vendors about the standards that their products conform to and how they interoperate with equipment from other vendors. With proper planning and preparation, an IP SAN can be an effective solution to the never-ending need for more storage.

Having a choice between a SAN infrastructure based on either FC or Gigabit Ethernet provides flexibility in deciding on the optimum approach. Furthermore, a combination of the two is also a viable possibility. In either case, the data to be stored is transported to storage devices using the block Small Computer System Interface (SCSI). The SCSI protocol has proven its suitability for efficiently moving block data between disks and servers.

Information for this Research Byte was taken from our recent report on this subject entitled, IP SANs Prove Their Worth. This report provides more detailed information regarding the current ROI and TCO of IP SAN deployments. Clients can view this report for free, and non-clients can purchase it online via credit card, at following link: https://avasant.com/report/ip-sans-prove-their-worth-2005/