While storage area networks are well-entrenched in the data centers of large and midsize companies, small enterprises are now stepping up their investments in SAN technology at a rapid pace. Our recent study entitled Reassessing Storage Area Network Economics indicates that 44% of small companies are currently researching, piloting, or implementing SANs for the first time.

The reasons are well-documented: Rapidly declining implementation costs and advances in storage management, coupled with the ever-increasing need for storage, are lowering the crossover point at which organizations are justified in migrating from direct-attached storage (DAS) or, in some cases, network-attached storage (NAS).

Making the decision to invest in SAN architecture requires an understanding of the differences between these storage approaches. Unfortunately, the differences are not always clearly understood outside the realm of the enterprise data center. SAN, NAS, and DAS are sometimes positioned as competing technologies, but in actuality all three are found in today’s enterprise IT environments and have distinct applications.

This Research Byte presents a concise explanation in layman’s terms of the various storage technologies and their corresponding benefits. For an understanding of adoption rates, return on investment experiences, and the total cost of ownership outcomes of over 200 organizations, read our study on SAN economics. The study indicates that most organizations are achieving solid ROI on their SAN implementations.

What Is a Storage Area Network?
One way to understand SAN technology is to compare it to DAS. In the beginning, each application server had its own direct-attached storage. If an application needed more storage capacity, a disk array was added to the server via a high-speed interconnect, often SCSI. In terms of both cost and performance, there is no beating direct-attached storage. And for some database applications that require rapid access, it may still be the preferred choice. DAS is also often the best choice for very small companies and departmental networks. But as the number of servers deployed on a network rises, the complexity of managing isolated storage resources also rises and the case for deploying networked storage grows.

This is why DAS is in rapid decline in the data center. SANs allow data centers to pool storage, eliminating the isolated storage arrays attached to application servers. This reduces the excess capacity required for each server, enables administrators to centralize storage management, and allows storage resources to be rapidly reallocated to various servers. SANs also make it easier to add more storage, and as we shall see, help set the stage for the next evolution in the data center: virtualization.

The most-widely deployed SAN technology is Fibre Channel, a high-speed gigabit interconnect technology that enables block-level transfer of data to storage arrays over distance as if the arrays were directly connected. In a SAN, servers connect to the pool of storage arrays via a SAN switch. Administrators manage the storage pool by assigning chunks of the storage capacity, called logical unit numbers (LUNs), to each application server.

Storage Area Networks Versus Network Attached Storage
This becomes clearer by contrasting SANs with another networked storage technology: NAS. While both NAS and SAN provide remote access to storage devices via a network, the similarity ends there. In technical terms, the primary distinction between the technologies is that NAS operates at a file level while SAN operates at a block level. The table in Figure 1, below, provides a comparison of the characteristics of SAN and NAS. 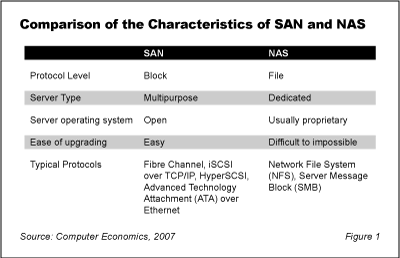 To understand the difference between block and file protocol levels, a little refresher on how storage works on a simple system like a PC can be helpful. When an operating system stores a file on a disk drive, it breaks the file into fixed-sized chunks, or “blocks,” and each block is written to a particular sector of the drive. The physical location of the file can be scattered across several sectors of the drive. This is all invisible to the user, however, because the OS’s file system keeps track of the physical locations of the pieces and creates the familiar directories where, in the user’s virtual world, files are located. In reality, moving a file from one directory or folder to another is a matter of changing information in the file system. The physical data never moves.

When it comes to understanding the difference between NAS and SAN, it helps to keep an eye on the location of the file system. A NAS device is simply a stripped-down server, often called an appliance, which sits on a network and has its own network file system. Today, simple NAS appliances can be purchased at retail outlets and plugged into a home network, making themselves available to the network like any other device that can receive a dynamic IP address. Configuration is a snap. When a host sends a file to a NAS appliance, the file is broken into packets addressed to appliance’s IP address. The NAS device reassembles the file and breaks it into blocks for storing on the disk, using its file system to keep track of the file and its associated metadata.

This works fine for small networks. But when a company begins to have a multitude of servers and hundreds of clients, the network can start to bog down. Moreover, the typical LAN is slower than Fibre Channel, and the NAS server can introduce additional latency. In contrast, a Fibre Channel SAN sends blocks of data through a separate, high-speed network directly to the storage array. The file system is located on the application server and the data does not need to pass through another server, as is the case with NAS. For fast, responsive, networked storage, it is easy to see why Fibre Channel is hard to beat.

Choosing SAN, NAS, or DAS
But newer developments are changing the picture, pushing NAS up the performance scale and SANs down the cost curve, in some ways blurring the performance line between these two technologies. The arrival of iSCSI SANs is driving down the cost of SANs. The iSCSI protocol is a serial implementation of SCSI that aligns with IP packets. While operating at slower speeds and offering lower throughput than Fibre Channel, iSCSI uses standard networking gear, can operate over long distance for remote backup, and is easy for network administrators to understand and manage. However, because of its better performance, Fibre Channel is still the preferred technology for most data center applications.

For small businesses and departmental applications, though, the iSCSI SAN is becoming a viable alternative to network-attached storage. iSCSI still operates at a block level and thus generally offers better performance, greater scalability, and more centralized management in cases where multiple NAS boxes would be required. While NAS devices are making gains in all of those areas and have the added advantage of operating seamlessly with multiple operating systems and file types, SANs present another advantage in the form of storage virtualization.

For enterprises of all sizes, the next big evolution is toward virtualization of server and storage infrastructure. In the simplest terms, storage virtualization entails creating one large, virtual file system. This can be done by synching up all the file systems on the host servers, by installing virtualization appliances in front of the SAN switches, or by embedding virtualization capabilities into the switches themselves. Without virtualization, each server is limited to accessing the LUNs assigned to it. If two servers were to attempt to access data on the same LUN, the data could become corrupted, and management software is required to guard against this. By managing all the file systems as a single unit, storage resources are not only theoretically easier to manage but data is more readily available to any host on the network. As data centers virtualize servers, the ability to boot from a SAN should also become an important ingredient in the creation of an on-demand computing infrastructure.

The bottom line: Direct-attached storage is the easiest and least expensive option to deploy. But while storage capacity is cheap, the cost of managing increasing amounts of data is not. With the exception of very small businesses and some specialized applications, DAS is losing ground to more manageable storage architectures. For small businesses, NAS proves to be an easy way to add storage resources to a network, and because it operates at a file level, it can work with any operating system or file type without complication. For this reason, NAS is also finding a place alongside SANs in the enterprise data center as vendors improve the scalability and manageability of NAS and higher-speed networks and other advances make the performance advantages of block-level data transfer less of an issue. However, iSCSI SAN technology is now vying with NAS in the small-business market while pushing into the Fibre Channel market above. This is because the technology costs less than Fibre Channel but offers some of the same manageability, scalability, and virtualization advantages. It can also operate over the Internet, like any IP network, which enables its use in remote storage and back-up applications.

Enterprises are thus likely to continue using a mix of NAS (for serving files to clients and applications that do not require high performance), iSCSI (for remote back-up and low cost), and Fibre Channel (where high-performance is necessary). But as data centers migrate towards virtualized environments, the superior manageability characteristics of SAN architecture–iSCSI and Fibre Channel–will favor SAN deployments. For small businesses deciding whether it’s time to take the step towards a SAN, the question is whether the cost of managing their storage infrastructure is rising as fast as their need to add additional capacity. If the answer is yes, then a SAN is the best solution.

For a more complete report on the economic characteristcis of SANs, please see our recent study, Reassessing Storage Area Network Economics, which provides an analysis of SAN adoption rates, return on investment experiences, and the total cost of ownership outcomes, based on our survey of over 200 data centers.