Home » Product » IT Organizations Finally Jump into SaaS with Both Feet

IT Organizations Finally Jump into SaaS with Both Feet

For years, IT organizations have been dipping their toes into the pool, but relatively few were diving into the deep end. Modern-day SaaS providers as we know them today have been around since just before the turn of the century. Despite that, our research has shown that most companies have been slow to adopt cloud-based software for the bulk of their applications portfolios. But according to the Computer Economics annual IT Spending and Staffing Benchmarks study for 2018/2019, companies may finally be taking the plunge. The percentage of companies that are investing heavily in cloud-based software has doubled in a single year. 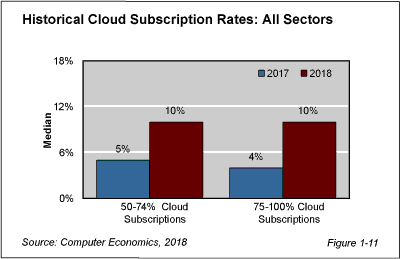 “The appeal of SaaS is pretty clear,” said David Wagner, vice president, research, at Computer Economics, based in Irvine, Calif. “The increased flexibility, reduced infrastructure burden, and ease of upgrades should have made SaaS a slam dunk. Yet most companies have shied away from using SaaS for the bulk of their applications, partially because of security fears. But as the benefits have become more widely recognized, SaaS is becoming the first choice for new applications and is quickly increasing its share in the typical apps portfolio.”

Spending on cloud applications has tied security/privacy as the top priority for new spending. These two areas have been at the top for at least four years running. Cloud infrastructure investments are also coming on strong as an area of investment. Data center spending is not much of a priority at all, as IT organizations shift some of their workload off-premises and use virtualization and automation to increase the efficiency for what remains in the data center. We expect that increased use of cloud infrastructure will mean a continued effort to move as many applications and processes out of the data center as possible. The wait is over, and IT organizations are finally jumping into the cloud in a more substantial way.

The Computer Economics IT Spending and Staffing Benchmarks 2018/2019 study is based on a detailed survey of more than 200 IT executives in the U.S. and Canada on their IT spending and staffing plans for 2018/2019. It provides IT spending and staffing benchmarks for small, midsize, and large organizations and for 27 sectors and subsectors. A description of the study’s metrics, design, demographics, and methodology can be found in the free executive summary.

This Research Byte is a brief overview of the findings in our report, IT Spending and Staffing Benchmarks 2018/2019. The full 30-chapter report is available at no charge for Computer Economics clients. Individual chapters may be purchased by non-clients directly from our website (click for pricing).