With unemployment remaining high and inflation staying in check, we anticipate only modest upward pressure on wages. IT workers will do better than many workers will, but wage inflation will remain modest. Overall, our 2014 IT Salary Report anticipates the typical IT workers will receive a pay raise in the neighborhood of 3.0%.

According to the U.S. Labor Department’s Bureau of Labor Statistics, total cost of employment for all civilian workers was up only 1.9% for the 12 months ended June 30, 2013. While exceptionally low, it does track with the 1.8% annualized inflation rate over the same period. The pay increases that IT executives intend to hand out in 2014, according to our year-end surveys, assumes the economy and the ability to raise prices will improve in the year ahead.

Figure 1 shows that at the median, the typical IT worker will receive a 3.0% pay raise in 2014, a projection based on a survey of 140 IT organizations. While even organizations at the 75th percentile are budgeting for only a 3.0% average raise, a sign that wage pressure remains low for most functions, the planned pay raises nevertheless still exceed the negligible rate of inflation. 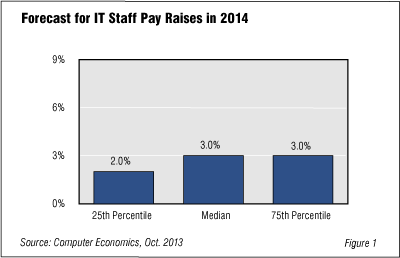 The full report estimates 2014 wages for 69 IT job functions for more than 400 U.S. metropolitan areas. We publish salary table in Excel format. The report is based on a study that draws information from our annual salary survey of 100 IT organizations in the U.S., our IT spending outlook survey for 2014, our annual IT Spending and Staffing Benchmarks study, and the U.S. Department of Labor’s Bureau of Labor Statistics compensation data. That data, which draws upon a sample of about 1 million state unemployment insurance records, enables us to extrapolate from our estimated national median wages for specific job functions to compensation for those same functions in various cities, counties, and regions around the country.

This Research Byte is a brief overview of our study, The Computer Economics IT Salary Report 2014. The full report is available at no charge for Computer Economics client or may be purchased directly from our website (click for pricing).