As we now know, the U.S. entered a recession in December 2007 and this recession almost certainly will continue well into 2009. IT managers are now grappling with just how intense this recession will be as they react to declining revenues. But IT organizations also need to keep an eye on the long-range outlook as they manage their technology portfolios and initiatives. While planning is difficult in the current environment, a careful examination of the history of IT spending during past recessions can help put this environment into perspective.

This Research Byte is an executive summary of our full report, IT Spending in Recessions: 2009-2010 Forecast.

Computer Economics has been conducting surveys of IT spending and staffing trends since 1990. This record of nearly 20 years of survey data is long enough to provide insight into how organizations changed their IT spending during the two previous recessions. Although the past is not always a precursor of the future, we find evidence that IT spending should rebound more quickly than it did during the tech-led recession in 2001, following a pattern more akin to what occurred after the deep 1990-91 downturn. Our long-range forecast, however, does not anticipate a return to the 1990 boom years, when Internet and Y2K spending produced a bubble that distorted historical patterns. Rather, we anticipate spending should rebound to the more modest rates of recent years.

In the full report, we first examine changes in gross domestic product (GDP) and technology investing over the period since 1990. We then compare that data against the long-term trend in metrics for IT spending levels, IT spending as a percentage of revenue, the percentage change in annual IT operational budgets, and the change in annual IT capital budgets. We conclude with a series of forecasts for IT operational and capital spending, based on the historical patterns.

Impact of Recessions on Investment in IT Equipment and Software
For this analysis, we first look at changes in GDP since 1990, as shown in Figure 1. According to the U.S. National Bureau of Economic Research, the organization that officially tracks business cycle expansions and contractions, the 1990 recession began in July 1990 and ended in March 1991. The next recession began in March 2001 and ended in November 2001. Finally, the bureau recently announced that the current recession began in December 2007. We will not know when it ends until after the fact. 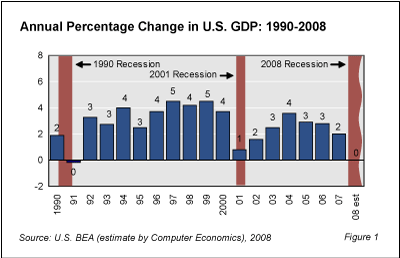 To understand how economic recessions impact IT spending, we first look at detailed statistics on economic activity from the U.S. Bureau of Economic Analysis (BEA), specifically, the percentage change from the preceding period in real private fixed investment in information processing (IP) equipment and software. This line item, a component of GDP, represents most U.S. IT vendor production, with the exception of services. However, the statistics do include software developed by organizations for internal use and, therefore, costs for software development services as well as internal payroll costs for in-house development.

As shown in Figure 2, IP equipment and software investment continued to grow through the 1990 recession, albeit at a relatively low level. Investment increased a modest 5% in both 1990 and 1991, before taking a major jump to 15% in 1992, the first full year after the recession ended. Investment in this category then exploded through the remainder of the decade, fueled by three drivers: economic expansion, the build-up to Y2K, and the Internet boom. Investment was well into double-digit growth in every year and exceeded 20% from 1997 through 1999. 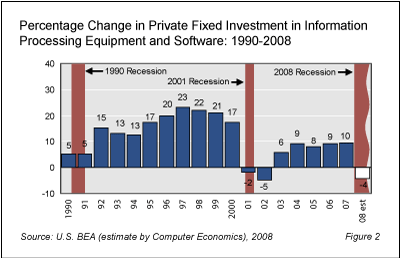 But all good things must come to an end–and bust often follows boom. The 2001 recession, in contrast with the decline in 1990, was much harder on IT spending because–in retrospect–there was a great deal of overspending on IT equipment and software in the latter part of 1990s. The need for extra hardware and software for Y2K remediation ended abruptly in 2000. Furthermore, the collapse of the Internet bubble and failure of associated high-tech startups dumped much IT equipment, especially communications gear, onto the secondary market. The 2001 recession was somewhat unique in that this huge overhang of excess IT equipment needed to be burned off before investment levels could recover. This intensified the negative impact of the 2001 recession on IT spending.

As a result, in the year of the recession, the annual growth in investment in IP equipment and software was negative 2%. Furthermore, in 2002, after the general economic recession had ended, the growth rate dropped to negative 5% before rebounding to a positive 6% in 2003. The growth rate in IP equipment and software investment during this decade has been modest, only reaching a high of 10% in 2007, less than half of what it was in the late 1990s.

The full report provides additional analysis of IT spending patterns during and after the previous two recessions. Data includes

The full report also compares the characteristics of the current recession with the 1990 recession as well as similarities and differences with the 2001 recession. We use this analysis as the basis for our forecast for IT spending coming out of the current recession. Our forecast for 2010 includes the expected percentage growth for IP equipment and software investment, IT capital budget growth, IT operational budget percentage growth, and IT spending as a percentage of revenue.

Computer Economics Viewpoint
In root causes, the current recession bears remarkable similarities to the recession of 1990, which was led by the financial sector. It also bears some similarities in IT spending patterns during the 2001 recession. In either case, over the past 20 years the negative impact on IT spending has never lasted more than two years. Therefore, based on our analysis, Computer Economics sees IT spending remaining weak through 2009, with a recovery in 2010.

As documented in the full report, IT spending cutbacks began in early 2008 and intensified through the year. This would point to recovery in IT spending in 2010. Of course, if the current recession is deeper or lasts much longer than usual, the recovery could begin later in 2010 rather than earlier. However, because IT executives have generally been showing spending restraint even before the current recession, there is not a great deal of excess equipment or personnel that need to be shed to bring IT spending in line with corporate revenues. Therefore, we believe that our forecast for a recovery of IT spending in early 2010 is most likely.

This Research Byte is a brief overview of our report on this subject, IT Spending in Recessions: 2009-2010 Forecast. The full report is available at no charge for Computer Economics clients, or it may be purchased by non-clients directly from our website at https://avasant.com/report/it-spending-in-recessions-2009-2010-forecast/ (click for pricing).

Current year metrics for benchmarking organizational IT spending and staffing levels may be found in our 2007/2008 IT Spending, Staffing, and Technology Trends study.