IT Spending Less with Carriers, More on Network Infrastructure

The percentage of the typical IT operational budget devoted to carrier services has been decreasing over the past four years while spending on network infrastructure bounced back in 2010 with the recovery in capital spending.

Our study, Network Infrastructure and Carrier Service Spending Benchmarks, finds that network infrastructure spending has risen from an average 3.4% of the IT operational budget in 2007 to 4.2% in 2010, as shown in Figure 1.

Infrastructure spending hit bottom in 2009 at 2.6% but then bounced back sharply. The rise likely reflects a pent-up need to upgrade networks in the aftermath of the global recession, as well as a growing investment in new technologies. 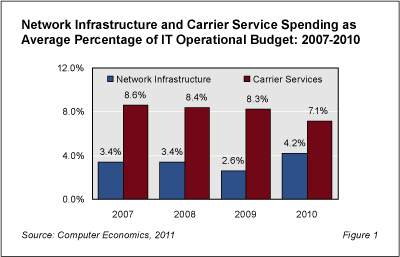 Over the same period, we see declines in average percentage spending on carrier services. In 2007, carrier service spending comprised 8.6% of the IT operating budget. This percentage declined slowly every year to 8.3% in 2009 and then more rapidly to 7.1% last year.

This likely reflects dropping prices rather than decreasing demand. Areas such as VoIP services and IMS (IP multimedia subsystems used to deliver voice, data, and video) have experienced significant price drops during the recession. These are being reflected in organizational spending patterns.

Another reason carrier service spending declined as a percentage of the IT budget may simply be that many IT departments already have migrated to VoIP, fiber, and other IP data services and are reaping the cost benefits of the migration.

The bottom line: Over the past four years, IT organizations have been able to squeeze costs out of fees paid to carriers for data and telecom services to pay for substantial investments in network infrastructure. With the squeeze on carrier service providers potentially nearing an end because of consolidation in the industry and a new round of capital investment by the carriers in their networks, IT organizations will need to pay close attention to their rising network costs. IT organizations need to ensure they are not overspending for carrier service or underspending on critical investments in network infrastructure.

To help IT executives assess the adequacy of their network infrastructure and carrier service spending plans, the full study provides guidance on how much organizations of various sizes are devoting to such spending. We provide metrics for carrier service and network infrastructure spending per user and as a percentage of the IT operational budget. The study provides metrics by organization size and sector.

This Research Byte is a brief overview of our report on this subject, Network Infrastructure and Carrier Service Spending Benchmarks. The full report is available at no charge for Computer Economics clients, or it may be purchased by non-clients directly from our website (click for pricing).