Quantum applications are gaining traction across industries. The early exploration scenarios will likely be in chemistry for developing new materials, protein folding, scenario simulation, and use cases involving complex computations such as weather prediction and quantum cryptography. In short, complex application areas that can justify the ROI as quantum computations will come at a whopping cost.

However, as costs inevitably come down, use cases will include common business practices. Additionally, some applications of quantum that cut across all industries are being explored extensively by enterprises for a quantum advantage. For instance, current cryptographic algorithms such as RSA and Elliptic Curve Cryptography (ECC) that are based on factorization can be solved through quantum computers a million times faster. Hence, quantum-resistant algorithms will become necessary from a security and performance standpoint. Similarly, a lot of research is also happening to maximize the impact of the quantum revolution on storage and networks.

Increasing the number of qubits while reducing the noise or error correction is the most critical challenge in quantum computing. Another area that is holding back quantum is the lack of talent. At present, there are no application program interfaces (APIs), and few developers or engineers available in the open market. This leaves enterprises with the only choice to build a quantum workforce in-house. Quantum computing requires highly specialized knowledge. Various PhD and master’s degrees along with short-term and on-demand, online courses are emerging.

Despite the current limitations for quantum, it is time for companies, particularly large companies and those in fast moving early adopter sectors, to start thinking about quantum. There could be some significant first-mover advantages in quantum, as it has the potential for creating entirely new products and services. Those looking to invest in quantum computing should look at the following:

Enterprise focus should not be put off by the current limitations of quantum computing but instead should start looking at the potential to solve key problems and build new business. The holy grail of quantum computing is a breakthrough for certain complex computations, but it will not replace classical machines. It will lead to a convergence of bits (classical), qubits (quantum), and neurons (AI-assisted programming) orchestrated through a hybrid cloud architecture.

New application areas will emerge in the next five years. Meanwhile, we will see the evolution of more affordable quantum devices such as quantum random number generators, which can detect random quantum events and convert those into a stream of binary digits. Random numbers have essential roles in various fields ranging from quantum communication, cryptography applications such as key generation, key wrapping and authentication, scientific simulations, lotteries, and fundamental physics experiments. 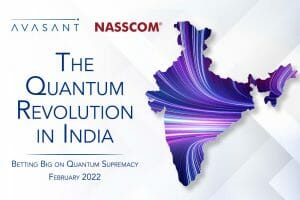 The Quantum Revolution in India: Betting Big on Quantum Supremacy