As an average percentage of total IT staff, server support personnel rose slightly over the past four years, from 12.2% of the typical IT staff in 2007 to 13.2% in 2010, dispelling the notion that data center employment suffered disproportionately during the recessionary period.

However, our study Server Support Staffing Ratios, also finds changes were taking place at a more granular level. Figure 1 shows systems administrators, systems programmers, and engineers were a relatively stable percentage of the IT staff from 2007 to 2009. The ratio then jumps sharply in 2010 to 9.9%, up from 8.5%, in just one year. These IT workers were at the front of the line when IT organizations began adding staff after actively trimming headcount the previous two years. 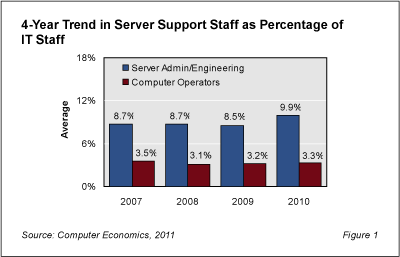 In contrast, computer operators and production control personnel show a drop at the start of the recession in 2008, to 3.1% from 3.5% of the IT staff in 2007, but then make a gradual recovery to 3.3% in 2010, perhaps as other positions suffer deeper cuts.

Over the past two decades, computer operations headcount has declined sharply in step with the decline in the use of mainframes and the automation of certain functions. Less time is being spent loading tapes, running batch-processing jobs, and monitoring systems. Data centers also are engaged in less printing today as reports are increasingly distributed electronically and printed locally, if they are printed at all. The decline in computer operations personnel, however, is a trend that appears to have hit bottom, at least, for the time being.

Systems administrators, programmers, and engineers, meanwhile, have remained at a relatively constant percentage of the IT workforce over the past decade. In 1997, they accounted for 9% of the IT staff, compared to 9.9% today. Over the same period, IT organizations have absorbed more and more computing power and the number of servers in the typical data center has skyrocketed. Today the growth in physical servers is being augmented by a proliferation of virtual servers.

What this means is that systems administrators have become more productive, and IT organizations have used that rising productivity to absorb more computing power rather than thin the ranks of system administrators. The net result is a relatively steady state for server support positions.